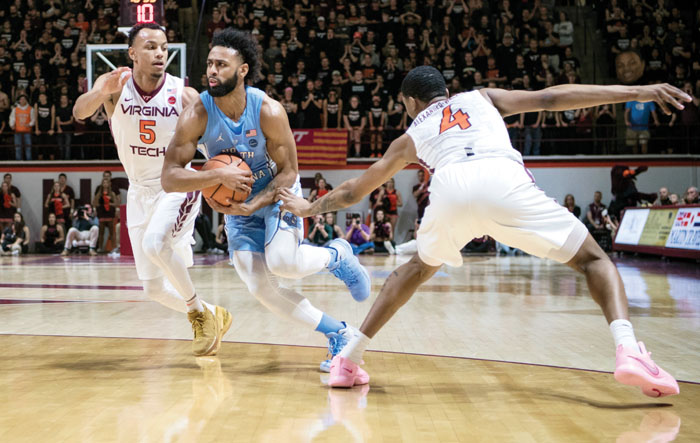 That was a game, Blackshear said, in which the Hokies “really didn’t just come to play.”

They passed this test with flying colors.

Justin Robinson scored 19 points, Ahmed Hill had 18 and the Hokies pulled away in the second half to beat the Tar Heels 80-69 on Monday night.

Blackshear added 16 points for Virginia Tech (14-6, 3-4 Atlantic Coast Conference), which used a 13-3 run after the Tar Heels closed to within three to open a 64-51 advantage with just under eight minutes remaining. UNC never got closer than eight again.

“Today was big for us,” Robinson said. “It was a good response.”

Hill scored the first seven points in the decisive burst and said the Hokies proved they can play defense when they focus on it.

“Once we do what the coaches want and what their plan is, we’re a great team,” he said.

It was that defense, Blackshear said, that sparked the run.

Joel Berry and Luke Maye scored 23 points each for the Tar Heels (16-5, 5-3). North Carolina turned the ball over 13 times to Virginia Tech’s nine, and Virginia Tech outscored them 11-2 off those mistakes.

“We have some issues and that’s my responsibility,” coach Roy Williams said. “I used to say I shouldn’t have to coach effort and intensity but I’m trying to coach that and not doing a very good job at it. It’s frustrating.”

As the final horn sounded, fans that had been chanting “just like football” streamed onto the court.

North Carolina: The Tar Heels like to play at a fast pace, but were not as adept at getting back on defense against the Hokies, who scored numerous baskets before 10 seconds had come off the shot clock.

Virginia Tech: The Hokies are second nationally in field goal percentage at .521, and while they came up short of that against the Tar Heels (30 of 63, 47.6 percent), they outscored North Carolina 32-26 in the paint and outrebounded them 36-35. The Hokies finished with five players with at least five rebounds and had seven different players make at least one 3-pointer.

NEW ORLEANS (AP) — DeMarcus Cousins had 44 points, 24 rebounds and 10 assists, Anthony Davis scored 34 points, and the All-Star pair led a 17-point New Orleans comeback in the final five minutes of regulation before the Pelicans pulled out a 132-128 victory over the Chicago Bulls in double overtime Monday night.

Cousins scored seven points in the second overtime on a 3-pointer, a turnaround jumper and two free throws with 8.2 seconds left. He became the first NBA player since Hall of Famer Kareem Abdul-Jabbar in 1972 to have as many as 40 points, 20 rebounds and 10 assists in a game, according to the Elias Sports Bureau.