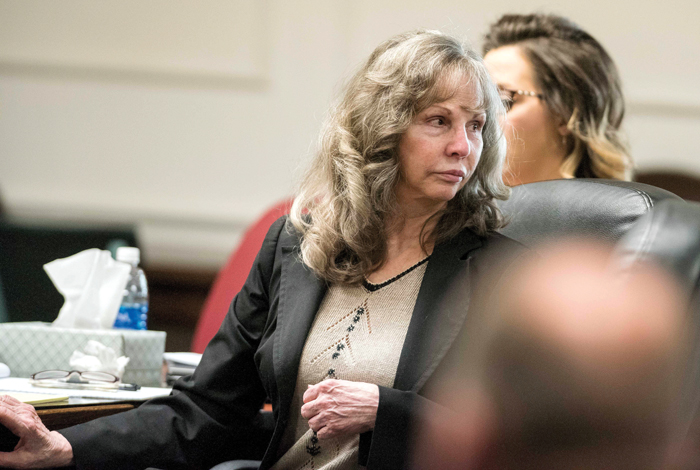 Defendant Marlene Johnson looks over at her family on the first day of her trial. Jon C. Lakey/Salisbury Post

SALISBURY — Marlene Postell Johnson mistakenly sent a text message in July 2013 to a 15-year-old making threats against someone she thought was Shirley Goodnight Pierce.

Rowan County investigators have said Johnson killed Pierce, 62, because she believed Pierce was having an affair with her estranged husband.

The trial will continue today with closing arguments, instructions to jurors and deliberations by the jury.

On Monday, jurors in Johnson’s trial on first-degree murder charges heard from investigators who said Johnson’s suspicions were far from the truth.

The text message, which was the subject of a lengthy debate about admissibility, brought to a close what has been a two-week emotional trial. Defense attorneys James Davis and Jay White, in an unusual strategy, presented no evidence on their client’s behalf, and Johnson elected to not testify in her own defense, which is not uncommon.

Testimony revealed Pierce’s death was so violent that the knife used to stab her broke off inside her neck. The handle that matched the knife was never found.

Johnson had surveillance photos of Pierce, bills that belonged to Pierce, and aerial photos of Pierce’s home and workplace. Rowan detectives found Pierce’s belongings, which also included a car title, during a search of Johnson’s home.

Alex Norton, now 20, testified that on the night of July 21, 2013, he received a text from a number that court testimony showed belonged to Marlene Johnson. Norton said he didn’t recognize the number but had received previous messages from the same number.

On that night, Norton said that after receiving a random message, he sent a question mark as his reply. He received a message back saying, “Back off, you will not get Ervin over my dead body, you skanky whore.”

Norton said he replied, “I think you have the wrong number.”

“Is this Shirley Pierce?” was the response.

Norton said he replied no.

“Sorry,” was the response from Johnson, court records showed.

After much debate, Judge Stuart Albright allowed Norton’s testimony. He also allowed the text messages to be introduced as evidence in redacted form, approving only the part of the conversation in which Johnson believed she was talking to Pierce.

Rowan County investigators found the same number, although written incorrectly, on a piece of paper found at Johnson’s Mooresville home. Albright said the text messages pointed to a motive for the crime, as well as intent or ill will and malice on the part of Johnson toward Pierce.

Albright said prior testimony showed that the number listed was for Johnson’s cellphone that was collected for evidence by investigators.

Albright said the information found at Johnson’s home shows she had “a keen interest in the victim” and that the text message exchange with Norton occurred 24 hours to 48 hours before Pierce’s death.

White said there was no proof that, although the cellphone belonged to Johnson, she actually sent the text messages. The judge disagreed.

At the beginning of the trial, defense attorneys Davis and White elected to not give opening statements.

They presented no evidence during the trial, but they did make many notable objections to evidence that was allowed before the jury, including some that was examined by forensic analysts.

In testimony about evidence that was collected or not collected by investigators, White and Davis questioned why Rowan County detectives did not obtain swabs of the fatal stab wound to Pierce’s neck and didn’t collect fingernail scrapings or clippings.

Detectives said it’s rare that they would collect fingernails; instead, they seal the victim’s hands in a plastic bag and seal it so that a forensic analysis could be done. Forensic analysts testified that it’s rare they would swab a wound, and that Pierce’s nails were too short to collect any evidence.

Analysts testified that DNA collected under a victim’s nails is likely their own.

During a brief exchange early in the trial, White questioned why detectives didn’t collect a soap dispenser in Pierce’s kitchen if, as detectives said, the killer used paper towels to wash off blood. Detectives seized paper towels that were left in the kitchen and laundry room. Analysts determined the blood-spotted paper towels contained only the DNA of Marlene Johnson.

The defense attorneys also disputed when Johnson received injuries to her hands. Rowan County Detective Chad Moose said he took pictures of Johnson’s hands upon her arrest. The injuries included scratches in various stages of healing and others that were fresher. Testimony revealed that Johnson received the earlier scratches when she broke a window at Ervin Johnson’s apartment and replaced it with Plexiglass.

After jurors were dismissed for the day Monday, Albright told the attorneys to stay and discuss his instructions to the jury.