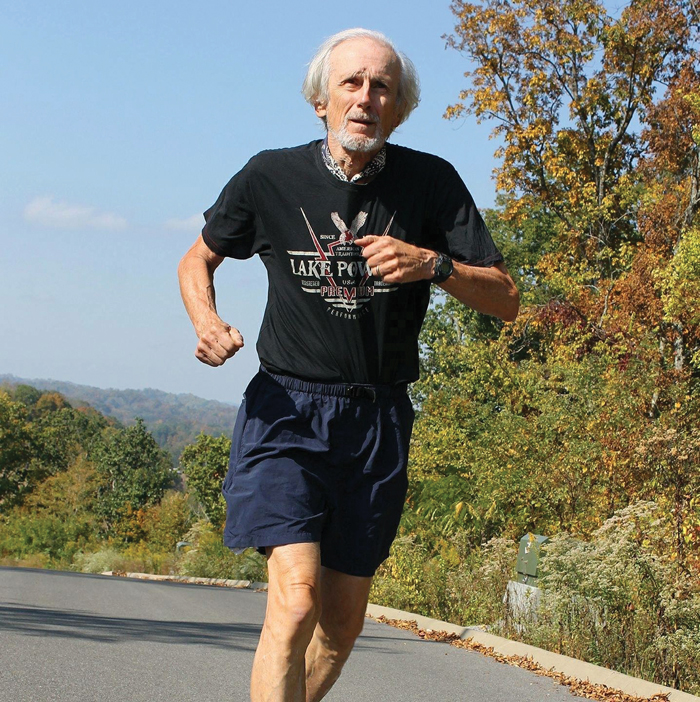 Grant Egley on a training run. He will speak at the pasta dinner and packet pickup on Saturday. Submitted photo.

It was one of those magical runs this Wednesday morning. Just the opportunity to run in the snow gets me excited and this time the forecast worked out. Up and out on the roads by 5:30 a.m. put me in the middle of the first accumulation.

No other singular time on the road tops a snow run. Being totally in the dark with an increasing white background and cushioned road surface add to the fun. A slower pace makes for a time of even greater personal reflection and problem solving while surrounded by such natural beauty.

I mentioned to our beginning runners class on Monday night how much fun it is to run in the light rain. Their expressions are always interesting to watch. Most didn’t seem excited about the prospects of rain and probably wouldn’t understand just yet my excitement over running in the snow. As I sit upstairs typing this column while watching the snow, I hope they will someday.

Salisbury’s historic Winter Flight 8K is next Sunday. While it isn’t the mega race that I remember from the 80s, Winter Flight still has a storied name in the southeast. In the early days of road racing, this race was considered one of the top events in NC for the year and certainly the best in January. Races were hard to find then, especially the really good ones. We’ve had visits from Olympians and Olympic hopefuls with Olympian Joan Nesbitt of Carrboro still holding the women’s record she set in 1992. Every year, we meet interesting runners from around the southeast.

An early entrant who certainly qualifies as interesting, Grant Egley is an 85-year-old runner who has a North Carolina 8K state record on his mind.

Egley lives at Lake Waccamaw. He was born in 1932 and raised near Dalton, Ohio where he ran track in high school and was the 1949 county high and low hurdles champion. In 1966, Dr. Ken Cooper published “Aerobics,” advocating running long slow distances to promote health and fitness. This prompted Egley to start running long distances and he has continued to follow a vigorous running program ever since. In the subsequent 50 years, he has logged over 68,000 miles that included runs of 3-10 miles over five days a week. Egley competed in 132 marathons and ultra-marathons and countless 5k, 10k and half marathons. He was never an overall winner of a long-distance race but often won or placed high in his age group. His most notable running performances are a marathon in 3 hours 3 minutes, 50 miles in 7 hours 35 minutes, 100k in 9 hours 39 minutes, 110 miles in 24 hours and 153 miles in 48 hours. All those performances were achieved after age 50. At age 78, he completed 50 miles in 23 hours.

Egley no longer runs marathons and ultra-marathons but regularly runs 20 miles per week to maintain fitness. At age 85, he set a State men’s age 85-89 record for the half marathon with a time of 2 hours 40 minutes and 19 seconds. Egley now seeks NC age 85-89 records at shorter distances.

With activities not limited to his own running, Egley also originated and directed many running events. While living in Mississippi, he directed the Mississippi 50-mile Run for 14 years. After moving to Lake Waccamaw, North Carolina, Egley directed the 50-mile Gator Gallop and the Gator Trail 50k Run for 17 years. He now assists in directing “Take the Lake,” the Labor Day Weekend event at Lake Waccamaw consisting of four physical endurance challenges.

Egley is a strong advocate of maintaining health and fitness by continuing to follow a vigorous physical lifestyle. Look for him at the starting line and on the course of the 2018 Novant Health Winter Flight 8K where he will attempt to break the existing record for ages 85-89.

“I consider it part of my mission to motivate senior citizens to do vigorous physical activity,” said Egley. Sounds to me like he is doing a great job of motivating all ages.

Registration is open for Winter Flight. Online registration is at www.sportoften.com and mail in forms are available at www.salisburyrowarnrunners.org . Registration will also be available Sunday, Jan. 28 from noon-2 p.m. in Goodman Gym at Catawba College.

Events include the 8K competitive race, a 5K Health Walk and a free half-mile fun run for kids, 12 and under. All participants in the 8K and 5K get a custom dri-fit shirt designed by Whimziggy and post-event refreshments and a chance at door prizes. All 8K participants will compete for commemorative awards while the 5K and fun runners all get a finisher’s medal.

Again this year, late registration, packet pick-up and a catered pasta meal are set for the JF Hurley YMCA on Saturday evening from 6-8 p.m. Egley will speak at this event. More information on both events is available at www.salisburyrowanrunners.org