Jenkins made sure Eagles knew they could win without Wentz 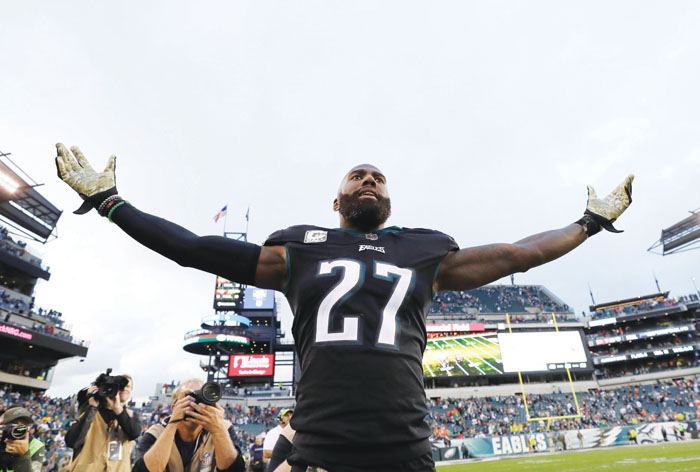 FILE - In this Nov. 5, 2017, file photo, Philadelphia Eagles' Malcolm Jenkins reacts after an NFL football game against the Denver Broncos, in Philadelphia. Shortly after franchise quarterback Carson Wentz left the field with a torn ACL in Week 14, the Philadelphia Eagles rallied to beat the Rams and win the NFC East title. In the locker room afterward, Pro Bowl safety Malcolm Jenkins gave an emotional, inspirational speech, imploring his teammates to believe they can win the Super Bowl without the guy who got them to that point. The Eagles are two wins away from their goal. First up is the NFC championship game against Minnesota.(AP Photo/Michael Perez, File)

PHILADELPHIA (AP) — Shortly after franchise quarterback Carson Wentz left the field with a torn ACL, Malcolm Jenkins gathered his teammates following a comeback win that clinched a division title. He gave an emotional speech, imploring them to believe they can win the Super Bowl without the guy who got them to that point.

The Philadelphia Eagles are two wins away from their goal. First up is the NFC championship game Sunday against the Minnesota Vikings.

“Carson being out of this, that sucks,” Jenkins told the team in the locker room after a 43-35 win at the Los Angeles Rams on Dec. 10. “But dig this, we set this up for whoever (is) in this room, that’s who we ride with, man. We said, ‘we all we got, we all we need.’ Believe that…. We got bigger goals … championships and that’s it.”

Wentz is the franchise quarterback and a leader by example. Jenkins, the two-time Pro Bowl safety, is the in-your-face leader. He’s the first one to address the group after coach Doug Pederson gives his post-game  speech.

“He’s embraced it and guys look forward to it,” Pederson said. “He’s got a lot of profound messages. He speaks from the heart and he speaks truth. So that’s been a positive.”

Jenkins says he always has a purpose when he speaks.

“I kind of try to analyze the situation of where we are as a team, do a little bit of reflection, but make sure that it’s not just an emotional response to keep everybody in perspective,” he said. “A lot of times I’m talking to myself to be most honest.”

As the underdog Eagles (14-3) prepare to host the Vikings (14-3), Jenkins reflected on his inspirational message following Wentz’s injury.

“Knowing that the media was getting ready to come in right after and those seeds of doubt, words of doubt were getting ready to come, I wanted to make sure there was a message of confidence and perspective before they had to actually address the media,” Jenkins said. “Obviously, we all hurt for Carson. It’s a huge blow to the team, but in no way does it change our goals. No way does it change our demeanor. Nothing’s changed, and that was kind of the message.”

“We always focused on the guys we had in the huddle,” Jenkins said. “Losing the amount of guys that we’ve lost and facing a lot of the adversity that we have, to have that mentality that we are sufficient, that the guys we have in this room can get it done, no matter what’s in front of us, has kind of been the story line of this team. Obviously I think everybody has kind of embraced that mentality.”

Jenkins spent his first five seasons with the New Orleans Saints and won a Super Bowl his rookie year. He joined the Eagles in free agency four years ago and has started every game, developing into one of the league’s best players at his position.

“Malcolm is always in the right place as a safety,” former NFL quarterback Dan Orlovsky told The Associated Press. “He just takes a level of confidence away from you because you can’t manipulate him, you can’t get him to do what you want him to do.”

Jenkins is not only a team leader, but has earned the respect of his peers. He’s very active in the community and established The Players’ Coalition to help advance players’ activism efforts. Jenkins led a meeting that included NFL Commissioner Roger Goodell and teammates with police, policy leaders and public defenders in Philadelphia to discuss criminal justice reform.

“I think that we can play a major role in changing the narrative from this argumentative, combative narrative to one of solutions, one that is aimed at bringing people together, because that’s what unique about this game,” Jenkins said.