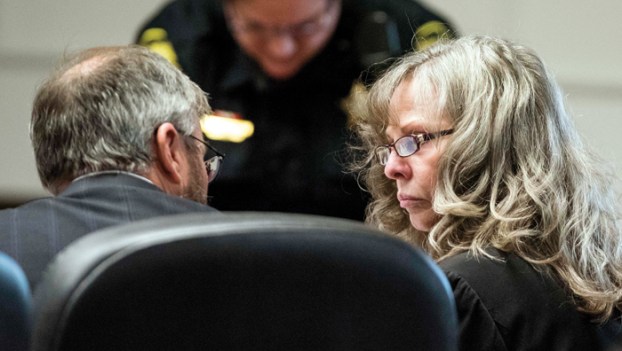 SALISBURY — No fingerprints or DNA were found on a knife blade that was lodged in the neck of Shirley Goodnight Pierce, who detectives say was stabbed to death by Marlene Postell Johnson in 2013.

But Johnson’s DNA was found on other items seized at the crime scene, according to the testimony of a forensic analyst.

Jurors heard from three forensic analysts Friday, all of whom tested the knife blade, a knife handle, a shower curtain, a hallway door and other items collected at the Evandale Road home where Pierce, 62, was found dead on July 23, 2013. Most of Friday’s testimony came from analysts who worked at the State Crime Lab.

The analysts tested items for fingerprints, whether blood was present and whether that blood matched Johnson or any other person.

Rowan County Sheriff’s Office investigators have said Johnson suspected Pierce was having an affair with her estranged husband, Ervin Johnson. Investigators say no evidence pointed to an affair. The only connection betweem Pierce and Ervin Johnson was that they worked at the same company, Mount Pleasant-based Tuscarora Yarns.

Testimony from law enforcement authorities said Johnson had surveillance photos and aerial photographs of Pierce’s Kannapolis home as well as pictures of Pierce’s vehicle parked at Tuscarora Yarns. Johnson also had the title to Pierce’s Cadillac, mail and other items at her Mooresville home, which was seized by investigators.

Pierce had filed restraining orders and complaints against Johnson, who had repeatedly harassed and assaulted Pierce. One of those assaults occurred in 2011 at a Concord restaurant. A former waitress testified that Johnson attacked Pierce.

Pierce’s fiance, Chuck Reeves, found Pierce’s body in her bathtub after he hadn’t heard from her in a while.

The knife blade that was found inside Pierce’s neck contained no fingerprints, forensic scientist Lindsey D’Amour testified Friday. D’Amour analyzes latent evidence at the State Crime Lab, she said, by testing fingerprints and impressions made by such things as tires or footprints.

She explained that because the knife blade obviously was found in Pierce’s neck, the blood and DNA on it would be her own. She said it would be unlikely that fingerprints would survive the environment in which the blade was found. D’Amour said the force of the blade used in the killing could have obliterated any fingerprints.

A black knife handle with gray tape wrapped around it also did not have fingerprints. The handle, which was found at the crime scene nine months after investigators collected evidence at Pierce’s home, did not match the knife blade found in her neck. No matching handle was ever found.

D’Amour said that reason fingerprints weren’t found on the knife handle could be because it was found outdoors or because of the sticky tape. When she removed the tape and tested the sticky side of it, there wasn’t enough ridge detail of a fingerprint to match it to anyone.

A paper towel that was found on the kitchen counter and another paper towel found between a laundry hamper in Pierce’s home was tested and determined to contain specks of blood, said Martha Traudot, a former forensic serologist with the State Crime Lab. Traudot said she studies blood, semen and other bodily fluids at the lab. She now works at a lab in Wisconsin and is a certified molecular geneticist.

Traudot said she tested a hallway marker and hallway door frame, both of which showed positive results for blood. Two cuttings from the shower curtain in Pierce’s home were also tested and both had blood on them.

A mattress at Johnson’s home was cut where investigators believed blood was found. Traudot confirmed the two cuttings taken from the mattress tested positive for blood.

Tanisha Walker, a forensic DNA analyst with the State Crime Lab, analyzed the DNA from the crime scene.

Walker said she tested cheek swabs from Johnson; her boyfriend, Tim Connor; Ervin Johnson; Chuck Reeves; and Richard Lauder, a man whom Pierce had problems with. She also tested a blood stain from Pierce.

The sample taken from the shower curtain seized from Pierce’s bathroom contained Pierce’s DNA, but Johnson’s DNA could not be excluded, she testified.

The analyst said she wasn’t able to reach a conclusion as to any DNA found on a ring taken from Pierce’s hand because of the insufficient quality of the sample. There were no matches on a watch that was on Pierce’s wrist.

No DNA was collected from a keychain and a bottle of bleach. Tests on Pierce’s cellphone could not exclude Johnson’s DNA on the sample taken.

The analyst determined that the hallway door frame, the paper towels and samples taken from Johnson’s mattress all contained the DNA of Marlene Johnson only.

The trial will resume at 9:30 a.m. Monday in District Courtroom 2. Judge Stuart Albright told jurors he expects the trial to finish sometime next week.

SALISBURY — The winter weather interrupted the murder trial of Marlene Postell Johnson, but testimony is scheduled to resume at 10:30... read more