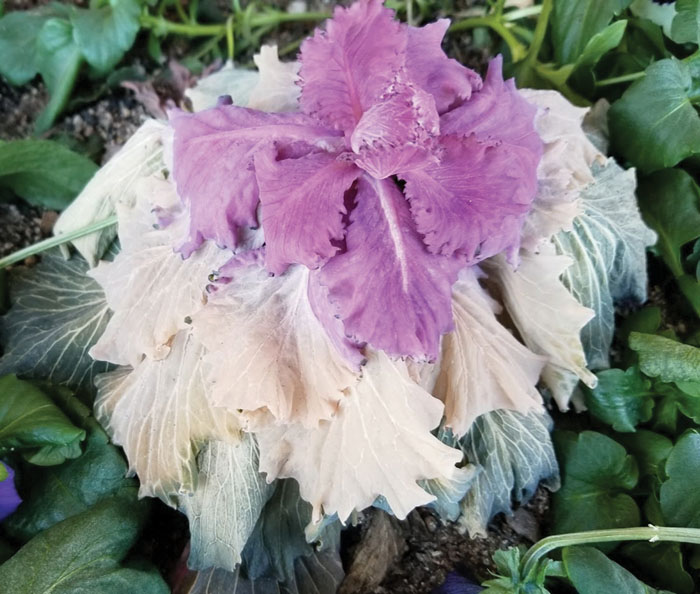 Submitted photo Ornamental cabbages do not fare well when temperatures drop to the teens. If it begins to turn white, throw it out.

Last week at this time the weather had peaked in the 60s, while this week we’ve reverted back to a typical January with snow and freezing temperatures.

The blanket of snow is a bit of good fortune because of its insulating effects on shrubs and bedding plants. There’s little doubt that shrubs and cool season bedding plants will be damaged, or in some cases, outright killed.

Pansies, snapdragons and ornamental cabbages and kale will sustain much damage. Pansies and violas can tolerate low freezing temperatures, often in the low 20s. However, when temperatures dip into the teens and single digits, there will be extreme damage in some instances.

So, what can we do when normal weather returns to make our plants look better? Pansies can be deadheaded and damaged leaves removed to make them look better. It’s a tedious job, but they will grow stronger and look much better if you take this action. They also can use a bit of liquid fertilizer when our winter temperatures begin to warm and stabilize.

When temperatures stabilize in the 40s-50s is an opportune time to give them a fertilizer boost. But it’s important to refrain from fertilizing pansies when the temperatures are warm, above or near 60 degrees. Fertilize them in cooler weather in the next couple of months with liquid bloom booster fertilizers. Application during warm weather promotes overly aggressive growth, causing the plants to stretch, becoming weak and spindly.

Ornamental cabbages and kale were seriously damaged in extremely cold weather. Generally, these do well in cold weather, but they are outright killed in temperatures below 10 degrees. When the leaves turn pale white, they’re on their “last leg” so to speak and need to be removed. Unlike pansies, ornamental cabbages will not recover and will continue to look bad.

Ornamental shrubs that usually bear the brunt of cold weather in the winter will almost certainly have some type of cold damage this spring. Some shrubs are showing signs of cold damage within days of the frigid temperatures.

On other shrubs, cold or winter damage may not manifest itself until mid-May when sections of shrubs turn brown and die. The stems of shrubs such as azaleas and camellias are often damaged with temperature extremes.

At this point, there is not much you can do for your shrubs except keep a close eye on the foliage and stems. Prune out damaged areas of shrubs in the spring when new growth arrives.