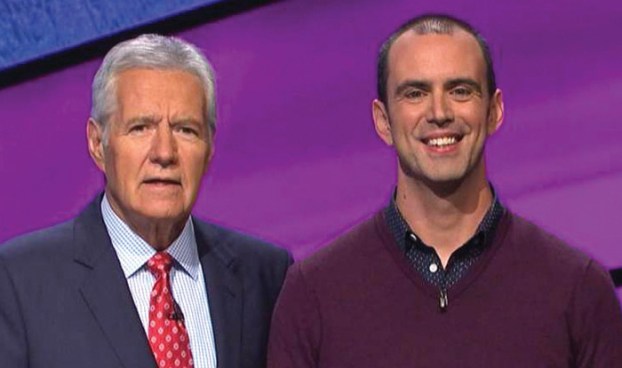 It was a good run, but Lee Quinn’s championship streak on “Jeopardy!” came to an end Friday.

Still, the 1996 North Rowan High School graduate and current high school teacher in Raleigh collected $44,800 in winnings over three shows, which were taped in Culver City, California, on Oct. 31.

Quinn, the defending champion, squared off against Rachel Lindgren, a fire lookout from Bend, Oregon, and Sarah Daly from Lakewood, Colorado. Friday’s game, played closely throughout between Quinn and Lindgren especially, came down to the Final Jeopardy question, which all three players answered correctly.

Adding in the $2,000 to his previous winnings from Wednesday and Thursday night shows, Quinn’s total came to the $44,800 mentioned earlier.

Quinn is son of Sandy and Chuck Quinn of Rowan County.

The Final Jeopardy answer was phrased, “It’s the only world capital whose name is derived from an Algonquin word.” And the correct question was “What is Ottawa?”

By Shavonne Walker and Elizabeth Cook news@salisburypost.com SALISBURY — Rowan County began to thaw out Thursday but not enough for the roads to be safe for... read more