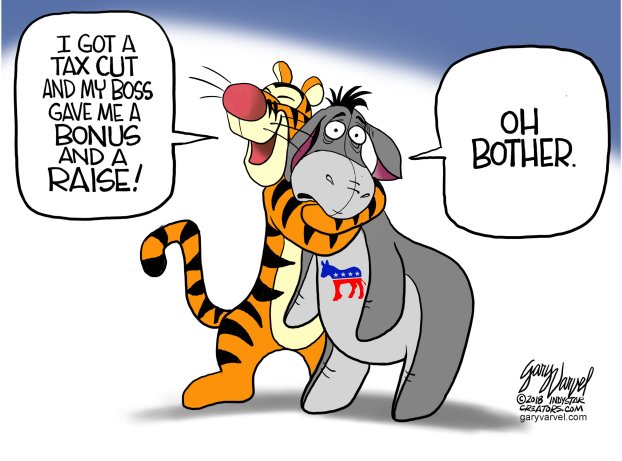 Ted Budd: How the tax law affects you In the days before Christmas, President Trump signed into law comprehensive tax reform for the first time in over three decades.

This was a major accomplishment that means hard-working Americans across the nation get to keep more of their money.

It means jobs coming back from overseas. It means bonuses and salary increases for workers in a number of different industries.

But if you listen to House Minority Leader Nancy Pelosi, you would think the world is collapsing out from under us. She called this tax bill “Armageddon,” “the worst bill in the history of the United States Congress” and “monumental, brazen theft from the American middle class.”

According to the Joint Committee on Taxation, in 2019 filers at every income level will see a tax cut, and, as CBS recently reported, a single mother in North Carolina making less than $40,000 will save $1,300 next year.

In the past few weeks, dozens of major companies have announced that they are giving cash bonuses to their workers in response to the new tax law.

To give a local example, BB&T raised its minimum hourly pay rate from $12 to $15 at the start of the year, provided a $1,200 bonus for about 27,000 of its employees and is donating $100 million to charitable organizations.

None of this strikes me as robbing the middle class.

The nonpartisan Tax Foundation predicts that North Carolina will see an additional 10,175 full-time jobs added and estimates that a middle-income family’s after-tax income will increase by around $591. More full-time jobs and increases in income for families are a win for our state, period.

Economists can debate how much our economy will grow due to this new tax law, but nearly everyone is in agreement that we will see growth.

That being said, my main focus going into the debate over tax reform was whether or not it would let working families keep more of their hard-earned money and make life simpler for them. My conclusion in the end was an emphatic “yes.” Here are two reasons why:

First, I haven’t met anyone who enjoys filing taxes each year. It can be a pain to keep the right letters in hand before taking the charitable deduction or saving receipts and keeping logs to prove other deductions.

According to recent IRS data, roughly 30 percent of households (around 44 million tax returns) still chose to itemize their deductions.

The bill I voted in favor of last month — the one Nancy Pelosi said would be “Armageddon” — simplifies the tax-filing process for millions of people across the country by nearly doubling the standard deduction.

For married couples filing together the standard deduction increases to $24,000 from $12,700. This is a win for North Carolinians who can now spend less time worrying about filing their taxes and more time with their family and friends.

Finally, I’ll mention another big win for families, which is the doubling of the child tax credit from $1,000 to $2,000 per child, and that allows parents to receive up to $1,400 as a refund if the credit is larger than their federal income tax liability.

As CNBC reported, this reform will “soften the blow of sky-high child care expenses.” We have long been in need of a more family-friendly tax code that addresses the existing bias against parents, and this bill helps accomplish that.

More take-home pay, a simpler filing process for many, and overall economic growth are things to cheer, regardless of your party affiliation.

Other Voices: North Carolina, land of the fee

North Carolina’s Republican lawmakers tout how much they have cut taxes, but they’ve also quietly allowed an increase in what... read more