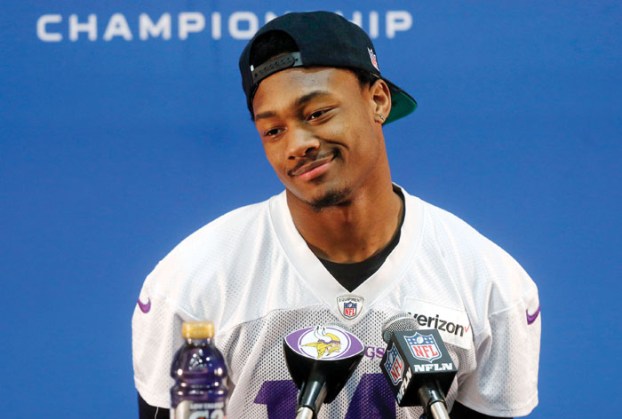 Diggs has only arrived at this stage of his life and his career, a Vikings standout on the verge of a Super Bowl, with an unrelenting diligence and a dose of humility.

For all the natural talent of a consensus five-star recruit coming out of high school, he’s sure had to work hard to get here.

Remember those first three regular-season games in the NFL? Not really. He was a healthy scratch on the sideline.

That’s a long way from the 61-yard catch-turn-run sequence that Diggs produced as time expired on Sunday that sent the Vikings to the NFC championship game with a 29-24 victory over New Orleans.

“He continually has gotten better over the past three years,” tight end Kyle Rudolph said.

“It’s awesome to see guys like that who work so hard have an opportunity in such a big moment and for them to make the most of it.”

Treating each practice as if it’s a game is a common response from teammates asked about Diggs and his work ethic. Thielen and Diggs are widely considered to be two of the sharpest and savviest route runners in the league.

“He wants to win. Whether he’s getting the ball or he’s not getting ball, blocking or not, whatever he’s doing, he wants to win,” Vikings cornerback Mackensie Alexander said, adding: “The thing I love about Diggs is he doesn’t let the game be bigger than him. He just kind of goes in the game, and it’s just another game. That allows you to play well.”

Setbacks became a recurring theme for Diggs, who chose to stay in his home state and play for Maryland so his family could watch him more often despite offers from powerhouse programs such as Auburn, Florida and USC.

With the Terrapins, though, he caught passes from four different quarterbacks over three seasons, with more than one starter used each year.

Injuries each season kept him from playing a full schedule, including a broken leg as a sophomore and a lacerated kidney as a junior.

When he declared for the draft a year early, there were also questions from NFL teams about his attitude and compliance.

After high stepping and somersaulting into the end zone in one game in 2013, coach Randy Edsall pulled him aside for a mild admonishment to remind him about the importance of reputation.

With substandard 6-foot height also a factor, Diggs fell to the fifth round for the Vikings to find one of the true steals of that 2015 draft. He made an immediate impact in his debut at Denver, with six receptions for 87 yards. Four games in, he had 419 yards and two touchdowns.

“When I was going into the combine and stuff like that, I had 100 percent confidence in myself,” Diggs said on Wednesday, as the Vikings reconvened for practice in preparation for their game Sunday at Philadelphia.

“I had a lot of support along the way. I had some great coaches and some great teammates that pushed me in the right direction. I’ll never take all the credit.”

His production waned down the stretch of his rookie season, with quarterback Teddy Bridgewater still developing on the job.

In Sam Bradford’s first game for Minnesota in 2016, the lid-lifter at U.S. Bank Stadium against rival Green Bay, Diggs hauled in 13 catches for 182 yards and a score in front of a prime time Sunday night audience.

But a groin injury cost him one game and some momentum. Then he hurt his knee and missed another game.

His first two games at home in 2017 were showstoppers, with two touchdowns apiece, but that groin injury popped up again at Chicago and kept him out for the next two weeks. Thielen, meanwhile, surpassed him as Case Keenum’s favorite target.

There was Diggs in the huddle on Sunday, though, with 10 seconds left listening to Keenum tell the receivers he was going to give somebody a shot.

“It meant so much to me to see my quarterback believe in me the last play of the game,” said Diggs.

His younger brother, Trevon Diggs, happened to be in the stadium that evening for his first live NFL game. He’s a cornerback and punt returner for Alabama who just won a national championship. Their father, Aron Diggs, died 10 years ago of heart failure .

“He started me in football. He played a huge part in what’s going on now. That’s the biggest thing. Kind of try and thank him prior to the game, him and God,” Diggs said, “and try and keep that thing going.”