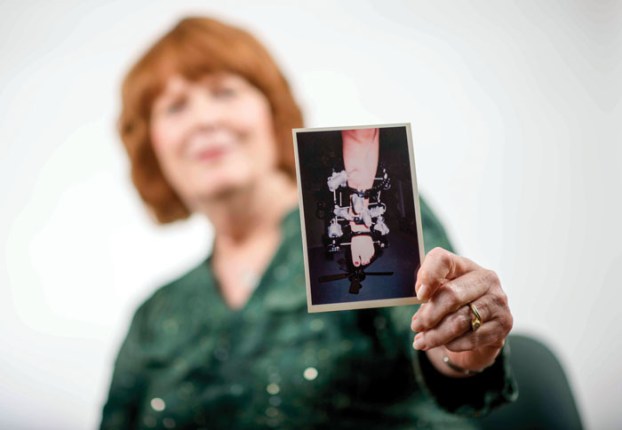 Jennifer Doering has had several major surgeries and lost a leg, and she sometimes relies on prescribed painkillers to help her endure her chronic pain. Jon C. Lakey/Salisbury Post

SALISBURY — Things have changed since the height of summer, when Dr. John Bream, emergency department medical director at Novant Health Rowan, saw at least one narcotics overdose patient roll through the ER each day.

“I think I’ve seen one in the past six weeks or so,” Bream said last week.

Bream said he doesn’t know what caused the sweeping rash of overdose cases in the summer of 2017, part of a national trend that sparked a cry for action. In July alone, Rowan County emergency communications received 91 calls for overdoses, most of them opiate-related.

And he doesn’t know why the overdoses seem to have nearly stopped — at least in Rowan County.

But he’d like to think it has to do, at least in part, with the steps local, state and national entities have taken to stem the tide. Novant Health added information sheets to patient discharge papers, warning them about the addictive nature of narcotics and listing the locations of medication disposal boxes.

Known as the Strengthen Opioid Misuse Prevention (STOP) Act, the law regulates prescriptions for narcotic medications and makes it harder for those who seek to abuse the medications to “shop around” at different doctor’s offices.

Three main parts of the STOP Act have rolled out over the past six months, beginning with requirements for prescribers and trickling down to patients.

Since Jan. 1, prescribers can send patients home with only five days’ worth of a narcotic medication after an initial consultation for acute pain — seven days’ worth if a patient has had surgery.

But while it may sound like a positive step in the right direction, the STOP Act has left many patients frustrated and confused and local prescribers tiptoeing around the issue.

“What it’s done is made many, if not most, physicians unwilling to prescribe narcotics,” said Dr. Sean Malone of Rowan Diagnostic Clinic.

Those who are found to be noncompliant with the law face legal charges, hefty fines or the loss of their prescribing privilege.

“A lot of physicians are just not willing to take that risk,” Malone said.

Instead, providers may prescribe the five-day limit for an acute condition, then refer patients to a pain clinic — an office that specializes in the management and relief of acute and chronic pain.

Like Novant Health, Rowan Diagnostic Clinic took a proactive approach. When STOP Act regulations began taking effect, the practice chose to form its own in-house pain clinic. Malone heads the new clinic, which is managed by a nurse practitioner.

In the six months since the STOP Act rolled out, Malone said he’s seen a definite difference in the way narcotic medications are handled.

“Now, whether that’s a positive or negative difference depends on who you talk to,” he said.

It’s helped the office flag patients who are misusing their medications or who are legally obtaining a medication and then selling or distributing it illegally. And it’s helped doctors like Malone be more aware of how often they turn to prescribing narcotics when there could be alternative treatments.

According to Malone, Rowan Diagnostic Clinic is bringing in specialists in other forms of pain management, like massage therapy, aromatherapy and acupuncture.

On the other side of the counter, local pharmacists say the STOP Act is just reinforcing practices they’ve always had.

“For us, that wasn’t much of a change,” said Teresa Casmus, pharmacist manager at The Medicine Shoppe.

The pharmacy’s computers automatically upload information about patients receiving opiates to the NC Controlled Substance Reporting System each evening, and Casmus said she personally vets new customers or those who seem suspicious.

She feels the new law has been “eye-opening” for prescribers.

“Now the physicians are using what we are already doing. Now they are having to be more involved in controlled substances,” she said.

But the STOP Act is not without its faults.

Pain has been Jennifer Doering’s constant companion for the past 30 years.

Doering estimates that she’s had more than 30 surgeries in her lifetime to combat everything from MRSA to a blown back. She has severe arthritis throughout her body, has lost a leg and lives with greater occipital neuralgia.

“My last day without pain was when I was 36 years old,” she said.

That was when she began to develop neuralgia, a chronic pain condition that was almost unheard of in the early 1980s. She said it took doctors two years to diagnose — and it was a decision she had to fight for.

“I went years in pain, and they kept saying it’s all in my head,” she said.

Now, with an artificial leg, fingers twisted by arthritis and a rod and 22 screws straightening her spine, Doering said she still has difficulty getting people to believe she lives with chronic pain.

“People look at me, they say, ‘You’re in pain? You look too good.’ To me, the only thing I can control is how I look,” she said.

She’s also constantly trying to get people to understand that the difference between acute pain and chronic pain is vast.

“You go to the dentist, you have a root canal, that’s acute pain. That will fade. Chronic pain will never go away. It will ebb and flow,” she said.

Doering is fortunate enough that she doesn’t need to take strong pain medication every day, but she said she does need medication on hand for her bad days — generally about once a week.

“I’m constantly trying to keep away from the thoughts (of pain), but there’s a time where it just sneaks in and you can’t get away from it,” she said.

For Doering, the STOP Act is a nightmare.

While the law has specific protections written into it for patients who suffer from chronic pain, doctors — and patients like Doering — are running into unforeseen problems.

In November or December, Doering’s primary care physician told her he would no longer prescribe her pain medication. Instead, he referred her to Rowan Diagnostic’s pain clinic. But the earliest available appointment there is still weeks away, in February.

“So what am I supposed to do in the meantime?” she wondered.

When her appointment finally comes around, Doering is worried she’ll be denied the medication she needs to function.

That, coupled with now mandatory urine tests, leaves her and other patients feeling frustrated and angry.

“The people who are in pain are being treated like we’re criminals,” she said.

It’s a sentiment Malone said he’s heard from numerous patients since the STOP Act took effect — and one that’s enforced by the way society views those who rely on narcotic medication to manage pain.

“Most of these patients don’t like being on narcotics,” he said. “They feel like drug addicts. They feel tied to the meds. … Our society really looks down on people who use narcotics. They’re seen as abusers.”

Malone said he has hope that as the STOP Act continues to “weed out” those who abuse narcotic prescriptions, it will have a positive effect for chronic pain patients in the eyes of society.

“It is legitimizing the patients who are still in the system,” he said.

While Doering said she’s not opposed to alternative treatments, she pointed out that they can be costly for patients and may not always work.

“I’m willing to try anything, but if it doesn’t work you need to have something to fall back to,” she said.

Practitioners whose first instinct is to send patients to a pain clinic may unknowingly create another problem. Malone said pain clinics typically require all patients to sign a contract that forbids them from receiving prescribed pain medication from another source.

While the STOP Act allows for chronic pain patients to receive medication for acute issues on paper, in practice it could cause them to accidentally violate “the letter of the law.”

In the pharmacy, Casmus said she’s running into several unexpected problems. For one, she said, the STOP Act’s requirement that patients check in with providers more frequently in order to get refills will raise their medical costs.

“And these are in addition to their regular primary-care visits. So a lot of patients are not happy about it,” he said.

Casmus has also noticed prescriptions for hydrocodone cough syrup — used to treat acute conditions like the flu, bronchitis or pneumonia — on the decline.

“So how does it affect me?” Casmus said of the STOP Act. “I feel like a sitting duck.”

While The Medicine Shoppe and many other pharmacies have increased security in response, they still worry it won’t be enough. And it’s left people like Casmus skeptical.

“There were good intentions to control the (opioid) epidemic we had going on. I’m not sure this is the answer,” she said of the STOP Act.

Doering, too, believes the law to be well-intentioned but, ultimately, misguided.

Malone said he believes the STOP Act will likely reduce abuse potential, and that it’s been a positive thing for medical professionals in the short term but a negative for patients. He hopes that will turn around, in time.

“I think long-term, it’s a net positive,” he said.

In the meantime, local medical professionals are continuing to push forward in the fight against opioids.

The STOP Act also requires practitioners to prescribe Naloxone, an anti-overdose drug, along with narcotic medications. Malone said he hopes that will decrease prescription-related overdoses.

While many don’t know if the STOP Act is the right answer — or what the answer may be — they agree on one thing: the opioid epidemic must be stopped.

“All of us are trying to do the right thing,” Casmus said. “But who knows if it’s the right answer?”

Every day is a blessing: ‘If I didn’t know I have cancer, I wouldn’t know,’ says Julie Carr

By Susan Shinn Turner For The Salisbury Post Every morning, between 4 and 6 a.m., Julie Carr takes a pill... read more