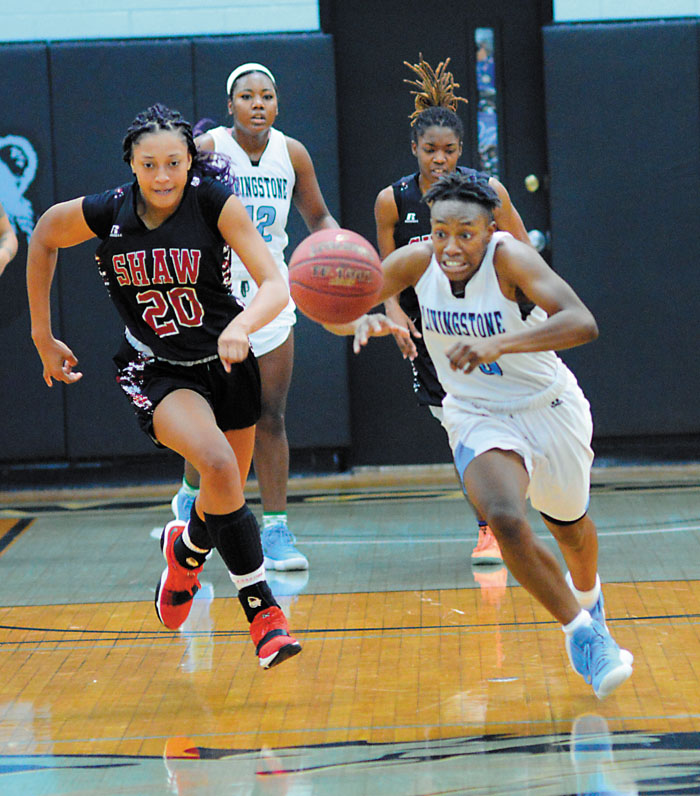 The visiting Shaw women’s basketball team used that run to take 16-15 first-quarter lead and turned it into a commanding, 52-23 halftime advantage here Saturday afternoon at New Trent Gym. The Bears then coasted to a 95-71 victory over Livingstone.

The Blue Bears (5-11 overall and 0-6 CIAA), who seem to lose a player every week, battled early and late, but in between, had no answer for Shaw’s Bears (4-13, 2-4). It was the seventh straight loss for Livingstone, which started the season 4-2.

Shaw’s win snapped their own seven-game losing streak — unusual for coach Jacques Curtis, in his 18th year in Raleigh. Curtis’ teams have been perennial CIAA and national powers. The Bears have won six CIAA titles under Curtis and made seven appearances in the NCAA Tournament.

“We’ve added people and we finally have who we’re going to have,” said Curtis, after the contest. “We don’t have all the players that we expected to have, but we’re learning how to play together. We’re evolving, but we can’t afford to take a step back. We stepped up today, but we’ve got to keep stepping up.

“Today was a step forward for the overall team and it’s big to get the win,” continued Curtis. “We shot the ball well and we did the things that we needed to do.”

The final seven minutes were small consolation for Silver, who has seen players leaving the team for various reasons, including leading scorer Zena Lovette in December.

“We’ve faced a ton of adversity this year, a lot of things out of our control,” explained Silver, in her second year at Livingstone. “It seems like we’ve had a different team all season … people in, people out, people in, people out. We just haven’t had a chance to figure out who we are as a team.

“The instant we feel like we’ve figured something else out, somebody else is gone (off the team),” she continued. “And it’s not injuries, but just life’s happenings.”

Junior forward Kyala Searcy had her usual strong game — 22 points, seven rebounds and seven steals — playing all 40 minutes. Sophomore guard Asia Green, always a defensive demon, had a huge offensive game on Saturday — 28 points and six rebounds. But no one else was in double figures.

“We know what we’re going to get out of both them, night after night,” said Silver, of Searcy and Green. “We always get a lot out of Asia, defensively, but sometimes we get that offensive production as well. And Kyala, she’s relentless on both ends of the floor, but they just can’t do it by themselves.”

Silver said that she appreciated the effort until the end, but not so much early on.

“We had a lot of fight, but need to fight a little earlier, so you don’t have to fight out of those holes in the second half,” said Silver. “We had only five turnovers in the second half, but those 12 in the first half really hurt us a lot. But we just have to keep plugging, get up the next day and try something else … get ready for the next game.”

That next game is not until next Saturday, at Fayetteville State, a 1 p.m. tip-off.