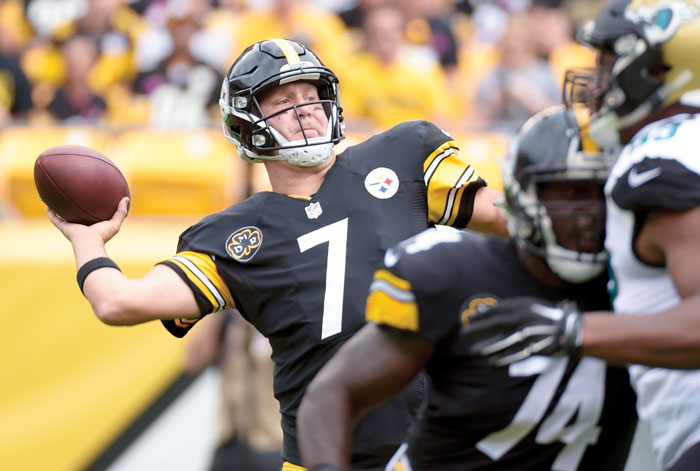 FILE - In this file photo from Oct. 8, 2017, Pittsburgh Steelers quarterback Ben Roethlisberger (7) passes in the first quarter of an NFL football game against the Jacksonville Jaguars, in Pittsburgh. Three months later, Roethlisberger doesn't want to talk about that five-interception meltdown against Jacksonville, a shot at redemption awaits Sunday in the playoffs. (AP Photo/Fred Vuich, File)

PITTSBURGH (AP) — The words that threatened to define Ben Roethlisberger’s season were uttered almost as an afterthought and with more than a hint of frustrated sarcasm.

It just didn’t read that way as it made the rounds on social media, or sound that way during a three-second sound bite played endlessly on a loop.

“Maybe I don’t have it anymore,” the Pittsburgh Steelers quarterback said in a somber locker room three months ago after throwing five interceptions in a 30-9 loss to Jacksonville .

Roethlisberger didn’t mean it. Call it a visceral reaction to having two of his 55 passes returned the other way for game-deciding touchdowns. Three days later the 35-year-old was back to calling himself one of the “best in the world.” It wasn’t just idle talk. He followed it up by spending the better part of the next 10 weeks playing like it.

The quarterback who will stride onto the field Sunday for a rematch against the Jaguars in the divisional round of the playoffs has his swagger back. Wide receiver Darrius Heyward-Bey jokingly gave credit to the beard Roethlisberger began growing in the aftermath of one of the most forgettable performances of his career. Of course, that’s not the reality. The guys who surround Roethlisberger in the huddle know the swagger never really left.

“Ben is the most talented guy I’ve ever been around,” Heyward-Bey said. “I’m not talking quarterback. I’m talking about talent. He can do a lot of different things. He believes in his ability and he’s going to show people on Sunday that he believes in himself.”

The player who openly pondered retirement last spring, the one who quarterbacks coach Randy Fichtner said in November will occasionally uncork a flutter ball while looking very much his age, heads to his 21st career playoff game at the height of his powers. Roethlisberger is averaging 298 yards passing since that forgettable three hours against the NFL’s top defense.

Roethlisberger’s thrown multiple touchdown passes in seven straight games and the Steelers ended the season with a 9-1 sprint, the lone setback a loss to New England on Dec. 17 in which his only mistake came on a poorly executed fake spike that resulted in a game-ending pick.

Having two of the top skill position players in the league in wide receiver Antonio Brown and running back Le’Veon Bell helps. So does the continued evolution of rookie JuJu Smith-Schuster and Martavis Bryant’s immersion into the offense following an ill-advised trade demand.

Yet Pittsburgh’s offense will only go as far over the next month as Roethlisberger can take it. Though he downplayed looking for payback after the Jaguars shut him down in ways that few teams have in recent years, not everyone is buying it.

“I’m sure just as any competitor would, when you go and have a bad outing or a difficult, tough outing against a team, you want that revenge,” Jacksonville quarterback Blake Bortles said. “You want to go prove that it was a fluke or whatever it might be. I’m sure that’s probably what he’s thinking.”

Not that Roethlisberger would admit it even if he is. Never one to go into great detail about how he goes about his job, Roethlisberger insists he’s focused simply on playing well. The fact it’s against the Jaguars is coincidental. There is no looking ahead to a potential shot at New England in the AFC title game, or a third Super Bowl that would provide an exclamation point on a potential Hall of Fame career.

“I am not worried about what’s going on up there (with the Patriots),” Roethlisberger said. “All I can think about and worry about is this defense that we are playing.”

A defense that will likely need to find a way to replicate its October dominance to extend its season. The Steelers have been forced to revisit the loss this week, one that put their journey from that moment to this one in perspective.

“That game for our entire group was kind of a watershed moment,” offensive coordinator Todd Haley said Thursday. “We stayed together, but there was a lot of pressure from the outside. A lot of outside factors that could have been divisive in some way for our group, but I take my hat off to the guys. They stuck together. They pulled together tighter. We knew that wasn’t our best football and we knew it probably really wasn’t as bad as it appeared.”

Or, as Roethlisberger can attest, as bad as it sounded afterward. The sound bite was just that, a bite, one that in a way played a role in his resurgence. One that ended with his sixth Pro Bowl selection and a very real shot to become the fourth quarterback in NFL history with three Super Bowl titles.

Roethlisberger’s confidence in himself was never an issue.

NOTES: CB Artis Burns (hyperextended right knee) did not practice Thursday but is hoping to play Sunday. DE Stephon Tuitt (elbow) also did not practice but plans to play. … LB Ryan Shazier, recovering from spine stabilization surgery, attended practice again in a wheelchair and hung out in the locker room after practice.

Fulmer wants to restore stability at Tennessee as AD