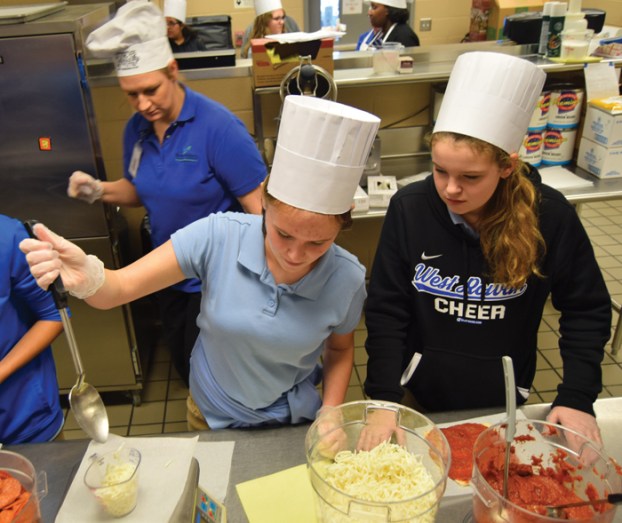 Students scoop out ingredients to make their own pizzas at a food and nutrition learning experience at Carson High School. Rebecca Rider/Salisbury Post

SALISBURY — When eighth-graders joined Horizon Unlimited’s BRIDGE program, many of them didn’t realize they’d be exploring career options and learning practical skills in addition to science.

The program — funded by a grant from the Burroughs Wellcome Fund — helps connect middle school enthusiasm to high school science, hoping to ensure that students will retain their thirst for knowledge once they enter high school.

According to planetarium director and program leader Neil Pifer, Rowan-Salisbury eighth-graders tend to do well in science-based assessments, but that number drops dramatically once the students enter high school. Sometimes the adjustment from middle to high school — with its increased socialization, responsibilities and rigor — is just too much, and science falls to the wayside. BRIDGE — Building Research Investigators Doing Growth Experiences — seeks to close that gap.

BRIDGE was launched at the beginning of the 2017-18 school year at three area middle schools: West Rowan, Knox and Corriher-Lipe. Pifer said there are plans to expand it to the county’s other middle schools next year.

On Tuesday, a group of roughly 30 students closed out a three-month study of food and nutrition by donning chef’s hats and commanding the kitchen.

Students involved in BRIDGE are taken on one experiential learning trip each month and have special programming available to them for the summer.

“We are providing after-school and summer enrichment and connecting them with their communities,” Pifer said.

For Pifer, Tuesday’s trip helped round out the students’ experience in nutrition. The short section included trips to Piedmont Research Station, N.C. Research Campus, and a kitchen.

And the trip was mutually beneficial, with food service workers getting to sharpen their teaching skills and show off a few things they have learned. Food and Nutrition Director Lisa Altmann said those teaching Tuesday had recently studied at the N.C. K-12 Culinary Institute.

“They were trained by chefs from all over the country,” she said.

Not only did they learn skills, study nutrition and grow as chefs, but they were also instructed to “teach it forward.”

“The whole point of this was for them to learn more skills. Their confidence goes up and they have to go out and teach it forward,” Altmann said.

Those who studied at the institute have been slowly training food service workers across the district, but Tuesday was an opportunity for them to reach out to students — and to help change the tired image of the lunch lady.

“We’re looking at trying to change our image,” Altmann said. “…We want to be culinary professionals. We want the kids to see us like that.”

Tuesday, the chefs wore white chef’s hats and handled knives and icing piping with skill — showing students how to decorate cakes and how to decoratively cut fruits and vegetables.

The students watched, learned and copied with rapt attention and a lot of jokes and smiles.

Jakein Johnson, from West Rowan, said he never would have sought out cooking skills or knowledge of nutrition without BRIDGE.

“It makes me think, ‘Wow, this is really interesting,’” he said.

Jakein said he joined BRIDGE because a friend suggested it, and also because he was familiar with Pifer’s fun and engaging teaching style through visits to Horizons.

“I thought, if that’s what we’re going to be doing on this BRIDGE program, that’s going to be a powerful thing,” he said.

The trips, learning opportunities and experiments help keep him occupied.

“I just really like it because it gives me something to do outside of school,” he said.

Currently, 68 students are part of BRIDGE. Students were selected based on interest and a short interview. Pifer said nearly everyone who expressed interest was selected.

“Eventually we’ll have to say no, but we haven’t gotten to that point this year,” he said.

In addition to nurturing students’ interest in science and math, the BRIDGE program gets them thinking about their future and exploring career opportunities.

Students agreed. Adyson Sisk, a student at Knox, said she wants to be a surgeon. BRIDGE’s trips have helped her learn more about her chosen field. While Adyson said later trips may change her mind, for now the experience has reinforced her decision.

“This just engages me,” she said.

“I think it’s a really good way to explore job options,” she said of BRIDGE.

Horizons Unlimited was one of 13 organizations in the state to receive a Student Science Enrichment Program Grant from the Borroughs Wellcome Fund. The $180,000 grant will be parceled out over three years, giving BRIDGE roughly $60,000 per year.

With the 60-degree weather and the start of a new season just weeks away, Catawba College baseball players took to... read more