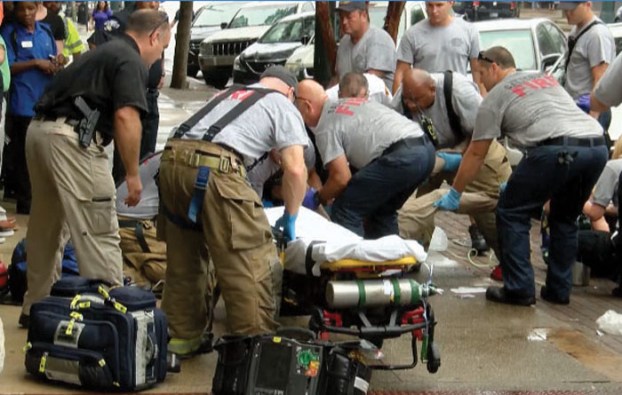 A man and woman found unconscious from a drug overdose in downtown Salisbury in August were taken to the hospital and revived. WBTV photo by David Whisenant I dare say that at least one of your family members, friends or acquaintances has either been over-prescribed and is now fighting addiction, or has even died at the hand of the opioid epidemic. No family in our state has been unaffected — either directly or indirectly. This local, national and global crisis has left its mark on us all.

My family is certainly no exception. We lost an amazingly talented, intelligent, and kind-hearted young member of our immediate family as a result of the influence of these high-powered drugs. Though his future was bright, his judgment was greatly impaired, and it led to the loss of his precious life.

Last week marked the implementation of the Strengthen Opioid Misuse Prevention Act (STOP Act). My hope is that we all recognize the importance of this new law as a crucial first step toward reversing the opioid tragedy.

How did we get here? There are countless ways. In many cases, addiction started with something as routine or common as a broken bone, strained back, pulled wisdom teeth or simple surgery. The STOP Act is in no way intended to stop the necessary treatment of serious chronic pain or terminal illnesses. It is important, though, that we encourage those close to us to have frank discussions with their medical providers about medications. Ask questions and educate yourself on the dangers of addiction.

Often times, unused drugs are left in medicine cabinets or elsewhere, where they’re easily misused. I challenge you to check your storage areas for unused Opioids or any other potentially deadly drugs, and take them to your local law enforcement headquarters for proper disposal.

The bipartisan STOP Act originated with three members of the Senate and four members of the House. I am proud to have been one of the seven primary sponsors. The law unanimously passed both the Senate and the House and was signed by the governor. But there is always more work to be done. I am working on ways to broaden our attack on this deadly epidemic and will be bringing forth additional legislation in the next session of the General Assembly.

This battle is in its early stages. We have a long way to go, but I want to thank the many physicians, pharmacists, dentists, veterinarians and other medical professionals who have helped craft legislation to combat the problem. It is incumbent on every elected official in our state to join the conversation and work together to end the havoc this crisis is wreaking on North Carolina families.

My desire is that the STOP Act generate more public awareness of the dangers of deadly drugs. We all have to fight this together. Every one of us. If you know of anyone overprescribing, abusing or otherwise illegally using opioids, I urge you to report them to your nearest law enforcement agencies. By doing so, you could save a life.

Tom McInnis of Rockingham represents the 25th District, including part of Rowan, in the N.C. Senate.

Clyde, Time Was: Listen carefully for the sounds of silence

Time was, we knew when to be quiet. Why is it so hard to find solitude? Can you handle the... read more