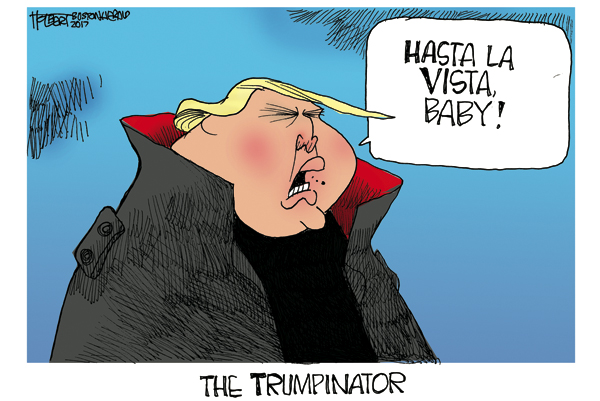 CRAWFORD NOTCH, N.H. — Here, in the shadow of the Presidential Range at the end of Donald Trump’s first year in the White House, one question is unavoidable if not unanswerable: Has the presidency changed Trump more than Trump has changed the presidency?

Almost every president has been transformed merely by taking the oath of office. That solemn vow transformed the identities of George Washington, Ulysses Grant, Dwight Eisenhower and the nine other generals who became chief executives; they became civilian commanders.

But it may be possible to argue that, after he leaves Washington, the presidency may not have transformed Trump at all. Certainly it would be hard to disagree that his first 11 months left the president acting, thinking, deciding and tweeting much the same way he did 11 months before he stood on the West Front of the Capitol, spoke of “American carnage” and vowed to put, and keep, America first.

Some presidents (William McKinley, Herbert Hoover and George H.W. Bush) went into the presidency fixed in character. Some (Kennedy, Barack Obama, even Franklin Delano Roosevelt) were works in progress. Still others (Truman, Richard M. Nixon and George W. Bush) were transformed by the office.

But none of them was as resistant to change as Trump.

In “The Impossible Presidency: The Rise and Fall of America’s Highest Office,” published in September, the University of Texas scholar Jeremi Suri argued that Trump’s supporters understood that it “was impossible to lead as president in 2016,” and, as a result, they “elected an anti-leader, Donald Trump, whose main qualification was that he had never served in public office and had no desire to act like a traditional public servant.”

He hasn’t. He has warred with his allies and sparred with, rather than romanced, his opponents. He has eschewed nearly every canon or doctrine of political behavior. Indeed, he actually has discredited conventional politics — a sharp departure from every one of his 44 predecessors.

Lincoln, facing an even more tumultuous first year than Trump, had every reason to forgo conventional politics in a nation literally breaking apart. “He saw no shame in the practice of politics, and experienced no priggish discomfort about what it takes to get great things done,” Princeton historian Sean Wilentz wrote.

He has in some ways removed party and ideology from the presidency. He was elected a Republican and  leans toward Republicans for succor. But he is far more intuitive than ideological. He has scrambled the political calculus for this decade, and may have changed the notion of conservatism forever.

He has made the presidency less formal. He is not the first president to do so; Andrew Jackson, Theodore Roosevelt and Carter all had impulses of informality. Though Kennedy affected informality, he was at home in a dinner jacket, even if his wife pressured him to wear it, and there were times when, as a campaigner, he consorted with a Western Massachusetts tavern keeper and powerbroker known as “Onions” Burke and had dinner at the Ritz in the same day.

Ronald Reagan, himself an outsider, still had enormous respect for presidential precedent and comportment. Trump does not, although, in fairness, Obama was photographed in shirtsleeves in the Oval Office and with his feet on the presidential desk.

Few presidents — perhaps none besides Jackson, Truman and Nixon — spoke of their rivals with the bitterness and anger of Trump. Truman’s remarks seem almost innocent today, the equivalent of saying “heck” in public. Nixon’s insults, some anti-Semitic, were uttered in private and were revealed only because the Supreme Court ordered that his tapes be released. But Trump’s are vitriolic, at times cruel and crude.

It is too early to know whether the president’s style will become a presidential style, employed by successors. Nor can we say whether it is a reflection of the coarsening of American life. Some things a president can affect, even control. This may be one of them. So much else that any president, or this president, confronts is well beyond his power.

David M. Shribman is executive editor of the Post-Gazette.

Greg Edds: Rowan must be competitive

Improving our community’s financial future is complex. After the 2014 election, county commissioners began to lay the groundwork for attracting... read more