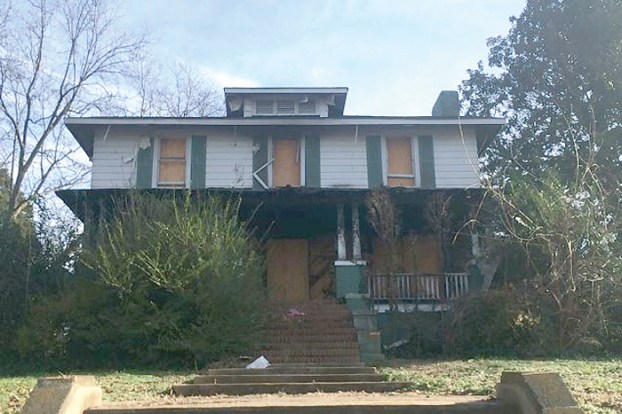 This fire-ravaged house at 1013 N. Main St. was donated to Historic Salisbury Foundation, which will move to stabilize the structure and sell it later to an interested buyer. Submitted photo

The two-story frame house was heavily damaged by fire in December 2016. Owner Christy Lockhart donated the home to the foundation this past December, and it will become one of the foundation’s Revolving Fund properties.

The foundation will clean out the burned parts of the interior and stabilize the house before putting it on the market for a new owner to complete.

“I’m glad everything worked out and that the house will be a home again,” Lockhart said in a foundation news release.

According to the foundation, the McCubbins House sits on a prominent site in the North Main Street Historic District.

While the four-square house was influenced by the area’s bungalows, it is predominantly Colonial Revival in style and appearance. It was built about 1926 by McCubbins, a well-known local real estate agent and businessman. He was a principal in McCubbins and Ramsey Realty and Insurance Co., among other businesses.

The house will be the 120th property to go through foundation’s Revolving Fund.

“Saving and rehabilitating this highly visible historic house will be a major step in the much needed revitalization of this vital 12-block entrance into our city,” said Edward Clement, trustee of Historic Salisbury Foundation.

The foundation has a history of tackling some of the more difficult rehabilitation and redevelopment cases. It acquired, stabilized, and sold the Fulton-Mock-Blackmer House on South Fulton Street that was in worse condition than the McCubbins House.

The foundation recently acquired and sold with covenants the McCanless-Busby-Thompson House on West Thomas Street. It was two days away from a final demolition order when it was purchased.