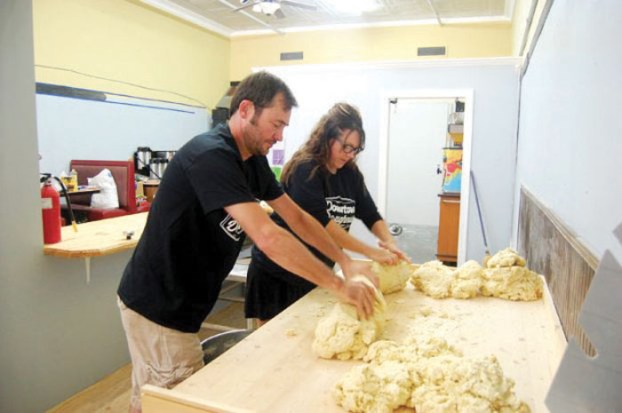 SALISBURY — Just five months after opening Downtown Doughnuts, Amber and Chris Fowler are closing the shop because their landlord — Piedmont Players Theatre — decided not to renew their lease.

Piedmont Players owns the Meroney Theater, which is next door to Downtown Doughnuts, as well as the building that the doughnut shop occupies. Amber Fowler said she believes the theater company is not renewing the lease because theater officials say the smell of doughnuts is seeping into the theater.

Piedmont Players Director Reid Leonard said he could not comment on why the lease was terminated, but he said officials of the theater company did talk to the Fowlers before terminating it.

“We did have conversations, so this hopefully wasn’t totally out of the blue,” Leonard said. “It was a deal that didn’t work out, and we’re sorry about that.”

Leonard said the Fowlers paid their rent on time.

“Basically, her lease was up Feb. 1, and we didn’t renew it,” Leonard said.

The Fowlers said the theater company wanted them to pay about $8,500 for a new ventilation system in keep the doughnut smell out of the theater.

The Fowlers said they invested about $10,000 into updating the shop — located at 209 S. Main St. — from the time they signed their lease last February until now.

“And now it’s just thrown away,” Amber said. “We make doughnuts, and it was going to smell like doughnuts. I kind of feel like we’re getting robbed, in a roundabout way.”

Amber Fowler, who is originally from Salisbury, said she is now moving both of her businesses — Downtown Doughnuts and The Dilly Dally at 110B S. Main St. — out of the city.

“Salisbury doesn’t need my business anyway, the way I see it,” she said.

She said several local business owners have told her that both Downtown Doughnuts and The Dilly Dally brought more foot traffic to their own businesses.

“I mean, everything happens for a reason,” Chris said. “This is probably a blessing. But I just hate that we’ve invested so much. … $10,000 is a lot of money to lose, and their property is better for it.”