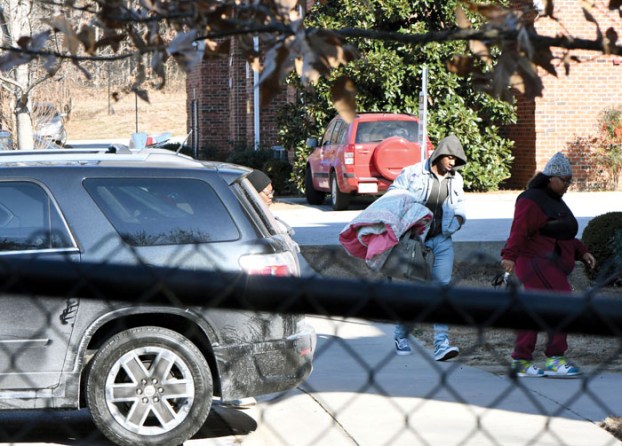 Students at Livingstone College have been asked to share living spaces after a water line break has shut down one of the dorms on campus. Jon C. Lakey/Salisbury Post

SALISBURY — More than 100 Livingstone College students were forced to move house because of a broken water pipe at the school’s Honors Residence Hall.

According to an email distributed to students by the Office of Student Affairs late Wednesday evening, the hall was closed because of “unforeseen circumstances for immediate repairs.”

“As unusual subfreezing temperatures spread throughout the region, it put strains on heating systems and pipes. Livingstone College’s Honors Residence Hall was not exempt as it experienced frozen and broken water pipes on Wednesday during this arctic-like weather phenomenon in one wing of the facility,” Livingstone officials said in a news release Thursday.

College officials said the problem was discovered Wednesday and those affected were informed the same day.

The damage displaced about 115 students who live in the Honors Residence Hall. Orlando Lewis, vice president of student affairs, said the broken pipes affected only one wing of the residence hall. Students in the other wing were not required to move.

The students who had to move will be rooming with other students at College Park, an apartment-style, off-campus residence hall on Old Wilksboro Road, or at the Livingstone College Hotel on Jake Alexander Boulevard.

Students at College Park live in apartments with three single bedrooms. According to Livingstone’s student housing applications, a single room can cost $600 a semester at minimum.

The Post received calls throughout the day Thursday from students and parents who were disgruntled about the change and the suddenness of the move. All requested anonymity.

“This is crazy. It’s ridiculous and it’s very inconsiderate of Livingstone College,” one student said about the last-minute notice that he’d be getting a roommate.

“If you’re paying money to go to this school, why do you have to share your room?” one parent asked.

But others chose to look on the bright side. In its news release, Livingstone included comments from students and staff members who said they see the move as an opportunity.

Mikaela Marsh, a senior, said she has not had a roommate her entire college career — until now.

“Mikaela Marsh agrees with her mother that this is a teaching moment. Life will be this way. Things can be going smoothly then suddenly something can happen and interrupt your comforts — like moving from one dorm to another, like sharing your space,” the news release said.

“It’s nobody’s fault,” said Tristen Coleman, another student interviewed by Livingstone staff. Coleman also had to move. “It shows everybody coming together to make peace.”

Elizabeth Lee, who manages College Park Apartments, told staff members she is using this as a teaching tool.

“This is what we do as a people. We look out for each other; we make room,” the news release quoted Lee telling students who waited to hear their room assignments.

While the initial email gives no timeline for how long students must room together — saying “you will have a roommate for the spring 2018 semester” — college staff members said the repairs will be complete and students will return to their rooms as soon as possible.

Livingstone also has said it will credit the accounts of those students who paid to have a single room but will now have a roommate.

“We are trying to do everything possible to accommodate our students,” Lewis said. “We are responding to something that was caused by Mother Nature, and we would appreciate the patience from students and parents as we navigate our response.”

According to college staff, the Salisbury fire chief visited College Park Apartments on Thursday and determined that the apartments, with the additional students, are in compliance with all fire codes.

The college also has arranged for transportation from both off-campus housing locations to Livingstone. Shuttle buses will run hourly from 7 a.m. to 10 p.m. Monday through Friday and 10 a.m. to 8 p.m. on Saturday and Sunday.

Livingstone also has a partnership with Salisbury’s transportation system. Students must present a valid and current student ID to use city buses.