Carson boys move to 13-0 with victory over Statesville 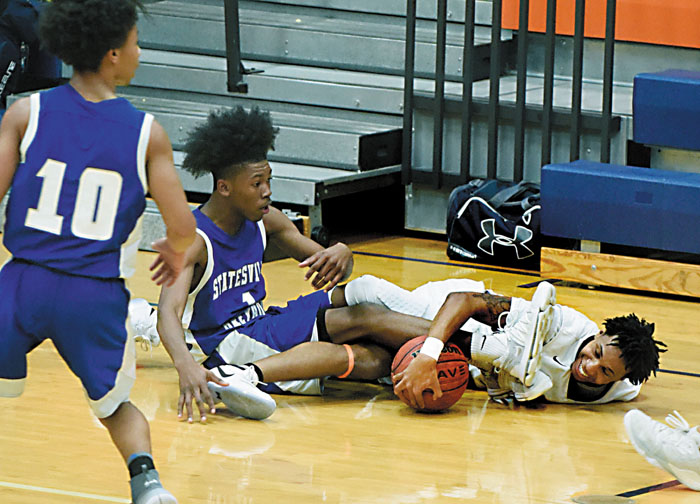 The unbeaten Cougars knew this was where the rubber meets the road — the start of North Piedmont Conference play — and they hardly altered their tried-and-true blueprint in a 79-65 victory against visiting Statesville.

“There are three teams in this league that are 1-0 tonight and three that are 0-1,” coach Brian Perry said after Carson earned its 13th straight win. “We’re happy to be on the good side of that.”

They are, even if things got a little uncomfortable in the fourth quarter. Statesville (6-8, 0-1) trimmed a 27-point, second-quarter deficit to 69-61 with about two minutes to play before Carson went 6-for-6 from the free throw line down the stretch.

“Once we get up big, we need to work harder to finish the game,” the 6-foot-4 Hairston said after pacing all scorers with 27 points. “They didn’t just lay down and quit on us. They fought their way back into the game — and we let them.”

Hairston had 19 points in the first 11 minutes and 23 by halftime, helping Carson sprint to a 52-28 lead. He scored on fastbreak layups, fadeaway jump shots, floaters down the lane and 3-balls from 20 feet that caught nothing but net. Then he opened the second half with one of his signature dunks — a volcanic slam accomplished like he was handing out business cards.

“He ate us up in the first half,” said long-time Statesville coach Sonny Schofield. “For us, it was terrible. They beat our tails. But we’re not seasoned or polished as much as we were four years ago when we left this conference.”

Maybe not, but the Greyhounds looked decidedly better in the second half. Behind the pull-up scoring of sophomore guard Miykei Fields and the wrecking-ball rebounding of 6-3 senior Izaiah Gathings, Statesville chipped away. The guests closed to within 60-48, following a pair of Gathings free throws with 1:41 remaining in the third period, capping a 10-0 run. Then in the fourth, Fields stepped to foul line and calmly sank two free throws, inching the Hounds within eight points with 2:07 to play.

White finished with 17 points and buried two of Carson’s four 3-pointers in the opening quarter. His driving layup from the left side restored order in the waning moments, providing a 10-point lead and triggering a 10-4 finishing kick.

“They contested our shots all night,” Perry said. “But in the first half they went them and got fouls, which led to a couple of and-ones. In the second half they did a better job of not fouling. But don’t kid yourself, they’re a good team. They have good guard play, they shoot the ball and they rebound down low.”

Schofield was far more pleased with Statesville’s second-half effort. “That’s the kind of team we can be,” he said. “A consistent team that plays to win instead of playing not to lose.”

Carson’s Jailen Williams scored 10 of his 16 points in the second half and made a converted a pair of dribble-drive layups that helped the Cougars maintain a 20-point margin in the third quarter. His last basket came off a strong, right-side push to the goal and made it 77-62 with less than a minute on the clock.

“In the first half, we were getting stops, getting big rebounds and Jamarius got to the rim pretty easily,” Williams said. “In the second half, they basically out-toughed us. They crashed a lot harder and contested our shots a lot better. They weren’t gonna quit, but we didn’t either. Our defense fuels our offense, so if we get stops like we did in the first half, we’ll be a tough team to handle in this conference.”

NOTES: Carson plays a non-league game at A.L. Brown this afternoon, then visits NPC foe North Iredell on Tuesday. … The Cougars are 6-0 at home. … Fields had 22 points for Statesville, which had won three of its previous four games. … Williams came out the game with a cramp in the fourth quarter. He returned but was unable to go to the free throw line when it flared up again with 32 seconds remaining. Teammate Cam Prugh stepped in and made a pair of foul shots.