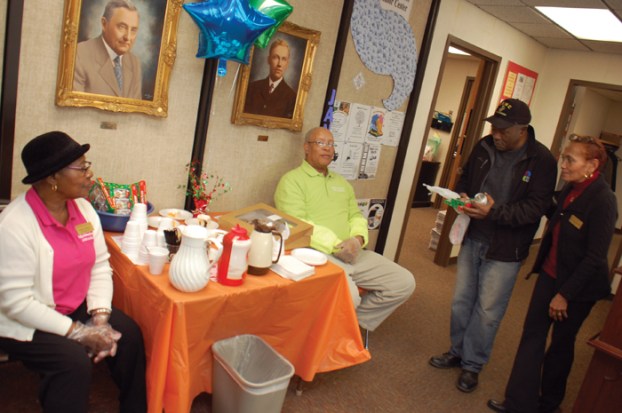 John Stout, second from right, stops by the a birthday booth near the front entrance to Rufty-Holmes Senior Center. Manning the spot Thursday were Mary Neely and Eddie Byers. Volunteer coordinator Juanita Woods is at right. Mark Wineka/Salisbury Post

SALISBURY — Near the front entrance at Rufty-Holmes Senior Center, Mary Neely and Eddie Byers manned one of Thursday’s birthday booths.

Around the corner and down the hall, Tom and Eve Martin took care of the other. At each location, the couples handed out free doughnuts, candy and cake and poured cups of coffee for anybody who stopped by.

They also encouraged people to sign the memory boards, which asked for a recollection of one memorable event in 1988.

It’s hard to believe, but it was Jan. 4, 1988, when the doors first opened at Rufty-Holmes Senior Center. So Thursday marked the 30th birthday of the nationally certified center’s three decades of offering programs and services to older residents of Rowan County.

During the daylong drop-in celebration, people also were asked to bring 2017 memorabilia, personal keepsakes or reminders of what Rufty-Holmes means to them. Those items went into a time capsule — a wooden box in one of the halls — which won’t be opened until 2020.

Executive Director Nan Buehrer said people also will be asked in coming weeks to contribute their personal short stories on how the senior center changed their lives, in hopes the newspaper can later run 30 stories in 30 days to mark the 30th year.

Here are samples of what was written on the dry-erase memory boards, noting things that happened to people in 1988:

• “Sold a business to start our family in a new and better direction.”

• “I started college as a nontraditional student.”

Buehrer herself wrote “moved away from hometown in Ohio with young family.”

Rufty-Holmes Senior Center offers a multitude of things for seniors to do. The Martins said they visit every day.

Eve has an exercise class three days a week. They love bingo, held from 1-3 p.m. every Tuesday. The Martins are members of the center’s Ambassador Club, and they attend Seniors Morning Out.

Thursday afternoon, Buehrer was the guest speaker for the monthly meeting of the AARP chapter, which meets at the senior center. As part of her presentation, she shared statistics from the N.C. Office of State Budget and Management, the N.C. State Center for Health Statistics and the U.S. Census Bureau.

North Carolina ranks ninth nationally in the number of people 65 and older, and in seven years, one out of every five people in the state will fit in that age category.

In the next 20 years in Rowan County, Buehrer said, the number of people 65 and older will increase 92 percent.

And here are some insights into Rowan County’s current population who are 65 and older:

• Approximately 800 grandparents (age 60-plus) are responsible for grandchildren under 18.

Buehrer reviewed some of the changes senior center devotees might be noticing in the near future in things such as the monthly newsletters, the website, the location of the popular pool table, marketing/outreach and volunteers.

She said her staff also is evaluating the center’s physical plant, programs and services.

“A good builder will tell you maintenance is important and upgrades for efficiency are key in keeping the home in top shape,” Buehrer told the AARP.

The programs, classes, workshops, services and organizations available at the senior center are too numerous to mention. A full rundown can be found at www.ruftyholmes.org.

Speaking of movies, to give you an idea of how long ago 30 years was, 1988 was the year the movies “Rain Man,” “Die Hard” and “Beetlejuice” were released.

Ronald Reagan was still president. A postage stamp cost 24 cents; gasoline, 91 cents a gallon. You could buy a new Ford Taurus for just less than $10,000.

It’s only proof that some things don’t have the staying power of Rufty-Holmes Senior Center.

GRANITE QUARRY — The Board of Aldermen wants Town Manager Phil Conrad and Mayor Bill Feather to negotiate directly with a property... read more