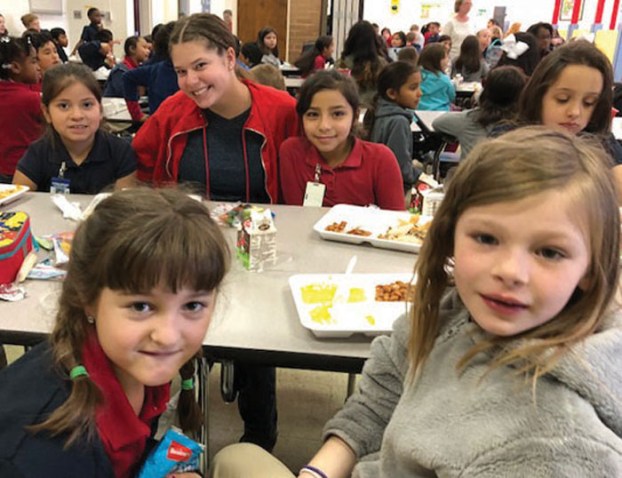 Students at North Rowan Middle recently visited Knollwood Elementary on their tour of the county. The older children had a chance to eat with and talk to younger students during their stay. Submitted photo

By Angelia Fleming and her eighth-grade class

Their first destination was China Grove Middle School. Adam DeLand, assistant principal, spoke about how the community affects students’ education and how the school community is warm and close-knit. Together, the group shared ideas for increasing family and community engagement in the schools.

This epitomizes the experiences throughout the class’s Rowan County marketing challenge. At each location visited, everyone has been welcoming and seeks to encourage family and community involvement.

As Deland led students on a tour, they learned that China Grove is the oldest middle school in Rowan County. It was built in the 1930s. The group got to see the band and chorus classes in action, and even got to see frogs being dissected.

In spite of bus problems, which shortened the visit to Southeast Middle School, North Rowan students were given a school tour. The students and staff were welcoming and talked about how much they love their school and community.

One highlight that stood out like a shining beacon was how the teachers use different strategies for each student so all can excel. Also, the teachers said they appreciate their students because they listen and are kind to their teachers.

North Middle students then boarded the bus for Jesse C. Carson High School. Their high school visits have held great appeal for many students as they are eagerly anticipating starting high school next year.

Many were interested in Carson’s renowned arts program. Carson’s drama, chorus, band and art classes were showcased by teachers and students. Not only did North Middle students get to see these classes, but they were encouraged to join in on some of the activities.

The students’ unanimous favorite was a game called “Warrior,” which is about concentration and projecting voices.

Students also experienced the school’s advisory program in action. North Middle groups were invited to participate in the activities, a musical gift exchange and creating snowflakes.

After Carson, North Rowan students were ready for the next destination: Knollwood Elementary. The interactions with younger students have been one of the class’ favorite experiences so far.

During lunch, the students got to talk to many of the elementary students about sports, school, Pokemon and more.

Middle school students saw an interesting dance activity in P.E. class and were amazed at how the children were so coordinated. The best part for the group was playing on the playground with elementary students. North Middle students felt like celebrities as they joined in on tag, basketball, playground games and just talking with younger children.

North Middle and Knollwood have a lot in common. Both schools share and appreciate diversity, a strength that makes the schools special.

The elementary school students invited their visitors to return.

A “Paw-some” adventure at Tiger World

At Tiger World, students saw a wide variety of exotic animals, from small to large and from around the world

As the animals’ backgrounds were shared, they tugged at students’ hearts. Several were brought to tears when they saw the animals and heard their stories.

The animal adventure began by meeting a pair of year-old tigers at the front of the zoo. The students were guided by Erin Carey, Tiger World’s director of wildlife.

Carey told the students that most of the animals were once neglected. For example, there were two cougars left under a man’s house and fed hot dogs for their entire lives. Both of the cougars suffered internal and external damage. One was left blind and the other was unable to walk for a long period of time.

The students’ hearts were touched as they realized how cruel people can be to animals. It became obvious the great care and dedication that Carey and the Tiger World staff give to improving the lives of these animals.

As the students walked inside the Reptile House, they were curious about what they would see.

To her surprise, Alaina Lopez learned that the enclosure houses more than just reptiles. While viewing the snakes, she was alarmed and jumped about 3 feet when she was surprised by the loud squawking of a cockatoo.

As the group made its way around the exhibit, student Hannah Freeman started dancing with the cockatoo, while the cockatoo mimiced Hannah’s movements.

As the group prepared to leave, Carey challenged students with the motto, “Conservation by education.” Tiger World’s goal is to make others aware of animals’ plight and, through education, improve their lives.

Students were inspired by the devotion and dedication that Carey and her staff give to these animals on a daily basis.

The common thread of compassion and caring followed students throughout the day at each location visited.

As students discussed all of the community field trips experienced so far, it became evident that while each area of Rowan County has unique qualities that make it special, the strong sense of welcoming and kindness stands out like sparkling jewels.

EAST SPENCER — Roy and Chi Chi Leazer lost all their belongings in a house fire Wednesday afternoon. But the... read more