Editorial: A moment for all at City Council 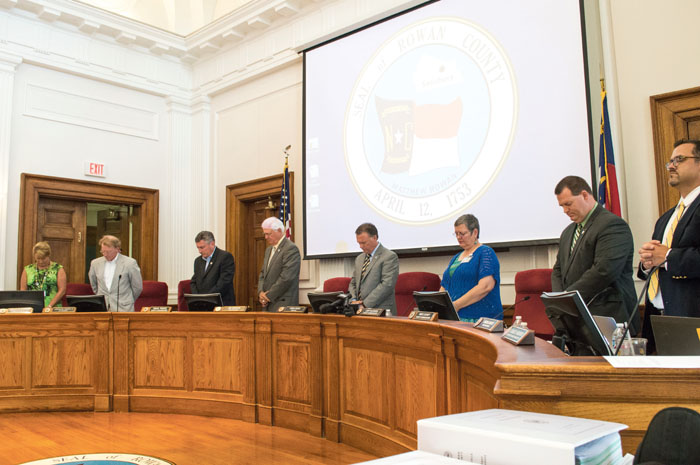 Laurel to Salisbury City Council for adopting a moment of silence at the beginning of its official public meetings. With a 3-2 vote on Tuesday, the council joined the Rowan-Salisbury Board of Education, Kannapolis City Council and a number of other local boards in replacing a prayer that could exclude some people  with a moment of solemnity that welcomes all.

Mayor Al Heggins, serving in public office for the first time, introduced the idea Tuesday. David Post, the city’s first Jewish mayor pro tem, jumped on it. Council members who opposed the change do not lose the freedom to pray as they see fit, but their prayers will no longer be part of official city business.

No one has publicly criticized the council’s prayers that we’re aware of. When he offered them, council member Brian Miller took pains to keep his prayers non-sectarian. Still, the subject has been on local minds ever since the ACLU sent the Rowan County Board of Commissioners a letter several years ago asking commissioners to discontinue their sectarian prayers — that is, their strictly and even adamantly Christian prayers. Commissioners were defiant, saying they’d go to jail before they let someone keep them from praying in Jesus’ name. An ACLU lawsuit ensued.

Other boards have taken the approach of having people of different religions give meeting prayers — something that so far has passed constitutional muster but tests some people’s faith in freedom of religion. At a Greenville City Council meeting last month, for example, two people objected after an Islamic cleric chanted Arabic prayers at the invitation of a council member. According to a News & Observer report, one person asked for a transcript, saying he had “no idea what that prayer was asking for.” Another told the cleric to speak English and described Muslim prayers as “degrading.”

By going with a moment of silence, Salisbury City Council avoids giving people of different faiths — or no faith — the impression that they are outsiders. The new city council doesn’t have to reinvent the wheel by, say, setting aside Robert’s Rules of Order. The council is smart, though, to take a fresh look at longstanding practices that could get in the way of citizens connecting with their government.