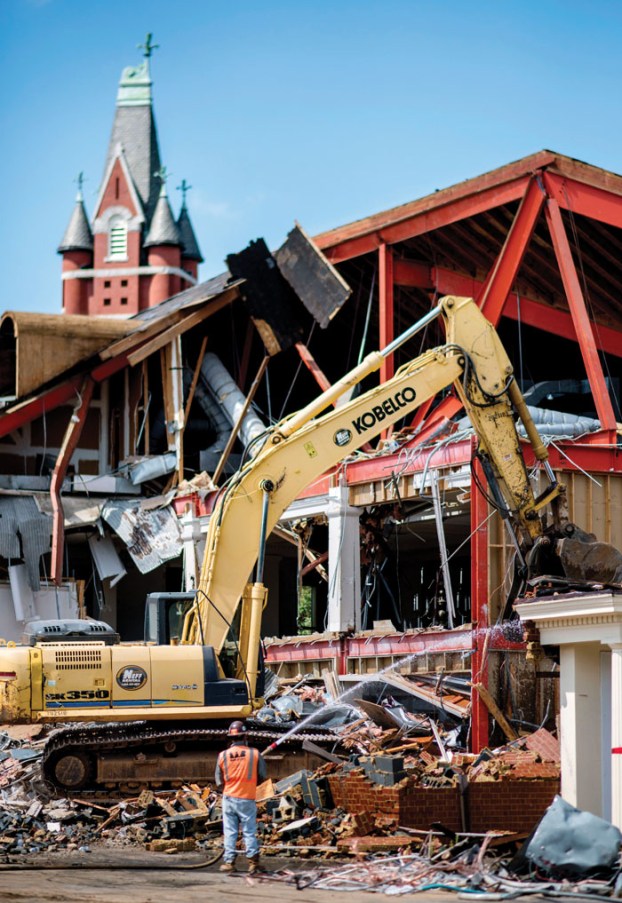 A fountain at the West End Plaza is covered in ice during below freezing temperatures in Salisbury on March 15, 2017. Kristi Craven/ Salisbury Post

Here are some events and lessons of 2017 that don’t rank in the top 10 but still deserve note.

• A bank disappears and a park takes root: Demolition crews dismantled the former First Bank Building in the 200 block of West Innes Street to make way for Bell Tower Green. Private funds set this project in motion when the Blanche and Julian Robertson Family Foundation acquired the property from the Maxwell Chambers Trust. The foundation turned the land over to a new, independent nonprofit named, appropriately, Bell Tower Green Inc. and headed by Dyke Messinger.

Now comes the hard part: raising money to actually build the park. This could be one of the big stories of 2018, along with development of the Empire Hotel, if that indeed comes to pass.

• The West End will get a teen center. When a community meeting was held at Miller Center a few years ago to talk about crime solutions, people spoke with emotion about the city recreation programs and staff that used to shape young lives at Miller Rec Center. It was a community hub. Those programs went away a few years ago because of cost-cutting. Late this year, the Robertson Foundation once again came to the rescue, announcing that it would donate $50,000 for a new teen center at Miller Rec. Let’s hope the city can keep it going.

• Veterans’ care receives closer scrutiny. At first the Hefner VA Medical Center appeared to be above the controversy that raged in 2016 about long wait times for veterans. But reports released in fall 2016 and spring 2017 said local VA employees manipulated data, and vets waited an average of 84 days to get appointments through the Choice Program. Members of Congress used words such as “fiasco” and “outrage.” The problem is clear, but the solution remains elusive.

• Weather whiplashes crops. Six to eight inches of snow and frigid weather greeted Rowan soon after New Year’s; the low on Jan. 8 was 3 degrees. But then it became unseasonably warm for an extended period. Forsythia bloomed in February.

A mid-March freezing spell did exactly what farmers feared — damaged fruit and berry crops. It’s a tale as old as time — the fickleness of Mother Nature. The impact was minuscule, however, compared to the hurricanes and storms that hit other areas of the country.

• Acting on internet rumors proves costly. A Google alert set up for “Pizzagate” shows that the name of Edgar Maddison Welch surfaces somewhere in the country nearly every day. Welch is the young Rowan County man who in late 2016 believed online rumors of Democrats running a child sex-trafficking ring out of a D.C. pizzeria, and he went to rescue the children. Welch fired his rifle into a door at the business before realizing no children were being held. No one was injured.

Welch surrendered to police and has been in custody ever since. In March, he pled guilty to interstate transportation of a firearm and ammunition, and assault with a dangerous weapon. A federal judge sentenced Welch to four years in prison

• The Civil War is not over, and Jim Crow still casts a shadow, too. The year saw a confluence of events regarding race and history that showed once more how the past is not even past. Debate about the prominence of the Salisbury Confederate monument resurfaced after a white supremacist rally in Charlottesville, Va., led to violence and death.

On a different front, an initiative driven by Salem Presbytery prompted a Salisbury event focused on the 1906 lynching of three black tenant farmers in Salisbury. Meanwhile, a book by noted sports journalist Bill James, “The Man From the Train,” presented the theory that the family the men were accused of killing were instead victims of a serial axe murderer who rode the rails from crime scene to crime scene.

And for one stunning day, everything was eclipsed by — well — the eclipse. Like 2017, it was a once-in-a-lifetime experience.

At this time of year we see several examples of caring for our less fortunate neighbors. The articles are based... read more