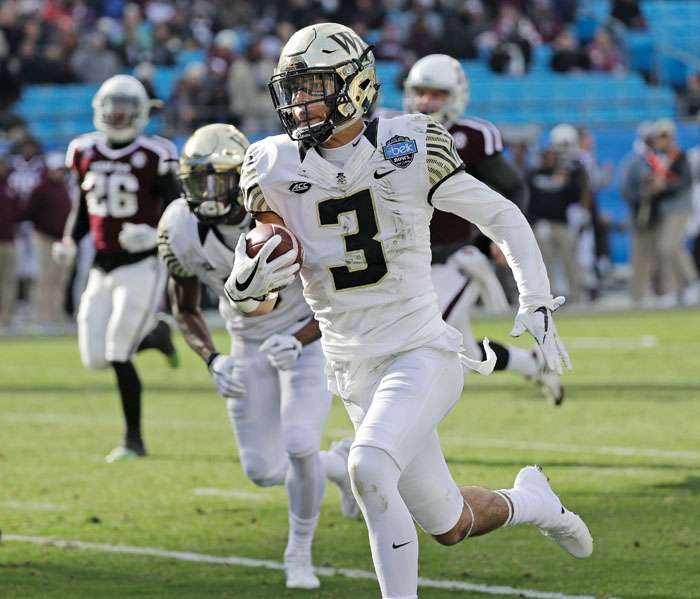 AP Photo/Chuck Burton ... Wake Forest’s Jessie Bates III (3) returns a punt for a touchdown against Texas A&M during the first half of Friday’s Belk Bowl in Charlotte. The Deacons won, 55-52.

The four-year starter who battled through two difficult sack-filled 3-9 seasons to begin his career, threw for 400 yards and four touchdowns to help Wake Forest beat Texas A&M 55-52 in the Belk Bowl on Friday.

“If you write the movie script, as soon as he walks out that door there’s a girl that falls in love with him and he gets married and lives happily ever after,” Clawson said. “It’s a storybook ending. You can’t make this stuff up.”

Clawson said Wolford, who was named the game’s Most Valuable Player, deserves every accolade he receives given how he helped put the Wake Forest program back on the map with toughness and tenacity.

It was Wake Forest’s second straight bowl season with a bowl win and its first eight-win season since 2008. The Demon Deacons won seven games last season.

“Two years ago there weren’t a lot of big John Wolford fans,” Clawson said. “For him to go out and ignore the critics and believe in himself is really a testament to his character and the type of person he is.”

For Texas A&M (7-6), the future now belongs to Jimbo Fisher , who will coach next season. Interim coach Jeff Banks coached the team Friday.

The teams combined for 1,260 yards and 107 points, tied for the fourth-highest scoring game in college bowl history. The all-time record is the 2011 GMAC Bowl where Marshall and East Carolina combined for 125 points.

Running back Matt Colburn ran for 150 yards and provided the go-ahead score with 2:18 left in the game.

Wake Forest’s defense stopped the Aggies on downs on their final drive to seal the win, which was no easy task considering Texas A&M’s potent offense.

But Wolford got the win.

“Football’s a game in which you face a lot of adversity ,” Wolford said. “I’m not the only one who’s faced it. This team has battled for four years, and to get the win today in such a great game, I’m so proud of them.”

Clawson said he had a feeling it would be a shootout .

“I told our offensive coordinator before the game, ‘Go fast. I don’t know how much it’s going to take. … Keep your foot on the gas,’” Clawson said. “This game was going to come down to whoever could outscore the other team.”

Wake Forest spotted Texas A&M (7-6) a 14-point first quarter lead following a pair of special teams miscues, but rattled off 31 straight points in a span of 11 minutes, 16 seconds to take a 31-14 lead in the second quarter.

Texas A&M battled back to take the lead late in the third quarter behind Starkel and Kirk.

“After that first quarter, it felt like an old Western Athletic Conference shootout,” said Banks, whose future with the team remains uncertain. “We wanted to stay positive with the kids and not get down on them. They were starting to get down in the first half. We got down three scores, and I was like, ‘guys, there’s nine minutes left in the second quarter.’”

Texas A&M: You’d have to think Kirk, a junior, will think strongly about heading to the NFL after his 13 receptions set a Belk Bowl record, breaking the mark held by Hakeem Nicks. He was not made available after the game but said earlier in the week he would take some time before making a decision on whether to return to Texas A&M.

Wake Forest: The most difficult task next offseason will be replacing Wolford, a four-year starter and the clearly the leader of the team. The good news for the Deacons is all five starting offensive linemen will return.

KIRK PLAYS THROUGH IT: Kirk stayed in the game after injuring his ankle in the third quarter. “I thought he broke it, but he kept playing through,” said Texas A&M running back Keith Ford. “That just shows the character he has.”

SERIGNE SETS RECORD: Serigne wrapped up his career as the ACC’s leader in touchdown catches by a tight end. “He’s the best tight end in ACC history,” Wolford said.

Texas A&M: The Jimbo Fisher officially begins as the Aggies usher in a new era after six seasons under Kevin Sumlin.

Wake Forest: The future is looking bright for the Demon Deacons after their second bowl win in as many years under coach Dave Clawson.