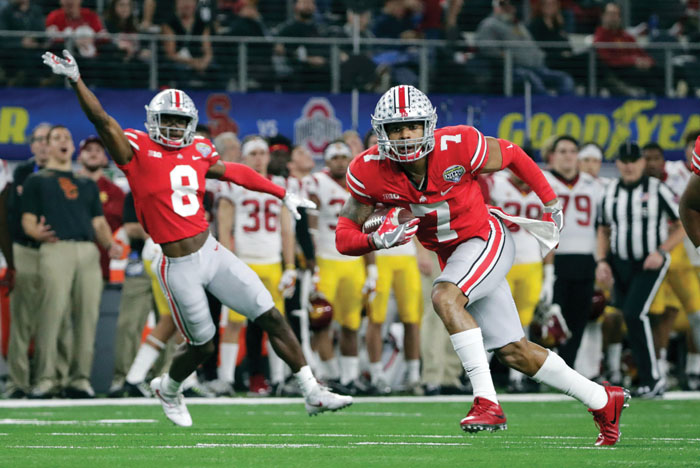 Ohio State safety Damon Webb (7) runs an interception in for a touchdown in front of cornerback Kendall Sheffield (8) during the first half of the Cotton Bowl NCAA college football game against Southern California in Arlington, Texas, Friday, Dec. 29, 2017. (AP Photo/LM Otero)

By The Associated Press
ARLINGTON, Texas (AP) — Playoff-snubbed Ohio State got a bit defensive even without one of its best defenders in the Cotton Bowl.
Damon Webb returned an interception for a touchdown after recovering a fumble to set up an early score and the No. 5 Buckeyes beat No. 8 Southern California 24-7 on Friday night in a matchup that traditionally has been in the Rose Bowl instead of deep in the heart of Texas.
The Big Ten and Pac-12 champions would usually play New Year’s Day in Pasadena, but the Rose Bowl is a College Football Playoff semifinal game this season.
Ohio State (12-2) instead quickly settled in at the NFL stadium where three years ago it won the first national championship in the four-team CFP format. The Buckeyes — with that bad loss at Iowa after an early setback to playoff team Oklahoma — were the first team left out this season.
USC (11-3), the Rose Bowl champion last season, lost for only the third time in its last 23 games. The Trojans had four turnovers that led to 21 Ohio State points in what could have been third-year sophomore quarterback Sam Darnold’s final game.
Buckeyes All-America junior cornerback Denzel Ward has already decided to go into the NFL draft and didn’t play after practicing with the team this week.
With Ward on the sideline in his No. 12 jersey over street clothes, fellow defensive back Webb had a fumble recovery on the third play of the game. That led to J.T. Barrett’s 1-yarder keeper for a score that put the Buckeyes ahead to stay.
Webb’s 23-yard interception return for a TD put Ohio State up 17-0 less than a minute into the second quarter. It was the first pick-six this season for the Buckeyes, and the team-leading fifth interception for Webb. Ohio State was up 24-0 when Barrett rab 28 yards for another touchdown after the first of Darnold’s two fumbles when stripped while being sacked. Darnold was sacked eight times overall.
MUSIC CITY BOWL
NO. 20 NORTHWESTERN 24, KENTUCKY 23
NASHVILLE, Tenn. (AP) — Justin Jackson ran for 157 yards and two touchdowns, and No. 20 Northwestern held off Kentucky in a Music City Bowl that might be remembered for injuries, ejections and a wild finish.
Both starting quarterbacks left in the first half with injuries, though Kentucky’s Stephen Johnson returned early in the third quarter. Kentucky lost running back Benny Snell Jr. to an ejection for contact with an official early in the second quarter, and Northwestern lost leading tackler and linebacker Paddy Fisher before halftime when he was ejected for targeting.
Northwestern (10-4) still finished off back-to-back bowl wins in consecutive years for the first time in program history, and the Wildcats notched their second 10-win season in three years under coach Pat Fitzgerald. The senior class also won its 27th game for the best stretch in more than a decade.
Kentucky (7-6) had a chance to win after Northwestern coach Pat Fitzgerald tried to convert his fifth fourth down of the game only to turn it over for the fourth time on downs — this time at his own 39 with 2:31 left. Johnson ran for his second touchdown of the second half with 37 seconds left. Kentucky coach Mark Stoops went for the 2-point conversion rather than play for overtime, but Johnson couldn’t connect with Tavin Richardson on the pass.
With quarterback Clayton Thorson knocked out early in the second with a right knee injury, Northwestern outran Kentucky 333-65. Safety Kyle Quiero provided the winning margin taking Northwestern’s second interception 26 yards for a TD with 7:49 left.
ARIZONA BOWL
NEW MEXICO STATE 26, UTAH STATE 20, OT
TUCSON, Ariz. (AP) — Larry Rose III scored on a 21-yard run in overtime and New Mexico State won in its first bowl game in 57 years, beating Utah State in the Arizona Bowl.
Utah State (6-7) had the ball first in overtime and Dominik Eberle hit the right upright on a 29-yard field goal, sending a groan through the Utah State crowd. Eberle made 16 for 18 field goals during the regular season, but missed three in the Arizona Bowl.
New Mexico State (7-6) ran two plays in overtime, with Jones bursting through a hole on the left side of the line to send the Aggies and their fans rushing onto the Arizona Stadium field. Jones finished with 142 yards on 16 carries.
The third Arizona Bowl started with some early fireworks on special teams.
Utah State’s Savon Scarver returned a kickoff 96 yards for a touchdown in the first quarter, then New Mexico State’s Jason Huntley took the ensuing kickoff 100 yards for a score.
The excitement leveled off considerably until LaJuan Hunt scored on a 1-yard run in the fourth quarter, set up by a shanked punt from New Mexico State’s Payton Theisler.
New Mexico State’s Tyler Rogers, held in check most of the game, answered by moving the Aggies on a 69-yard scoring drive, capped by his 11-yard touchdown pass to Jaleel Scott that tied it at 20. A video review overturned the initial call that Scott was out of bounds.