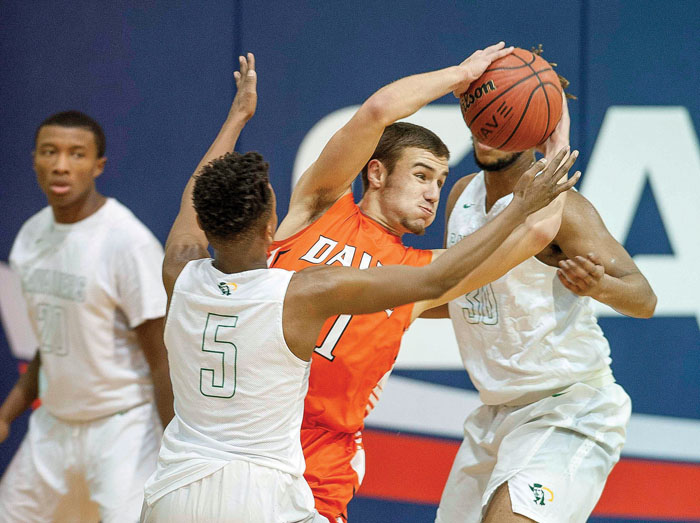 SALISBURY — There’s no way to lose if you get 30 offensive rebounds, right?

Well, North Rowan’s boys managed to do it. The Cavaliers hammered Davie County on the glass, but still lost 53-45 in Saturday’s third-place game in the Dale’s Sporting Goods/Sam Moir Christmas Classic.

North had 52 total rebounds to Davie’s 36, and it was 30-10 as far as offensive boards. But North missed a lot of layups, three or four on some trips. Not that they were uncontested layups. Most were put-back attempts in heavy traffic, and whistles didn’t come very often.

“There was a lot of contact — but with no calls,”  said North coach Martin Unger.”There’s nothing you can do except try to fight through the contact and finish. But our guys are young. They’ll get stronger and they’ll finish more of those plays, but that takes time.”

What the 1A Cavaliers (as well as fellow Yadkin Valley Conference member North Stanly) proved in the tournament is that they can hang with the big boys. Davie is a seasoned, solid 4A club, and the War Eagles had to fight for their lives.

“We’d scouted North, we knew they could rebound,” Davie coach Mike Absher said. “We knew we couldn’t let them turn this into a volleyball match, but then they went out and did it anyway. They are monsters on the glass.”

Third-seeded North  (6-3) got off to a wretched start, not surprising considering the amount of energy and emotion the Cavaliers used on Friday night in a draining overtime loss to Salisbury in the semifinals.

“Tough loss,” said North’s Brevin Goodlett, who had 18 points and 18 rebounds. “But we knew we had to bring it again.”

North started bringing it in the second quarter, wiping out a 10-4 deficit and getting even at 16-all on a 3-pointer by Goodlett. When Goodlett soared to tip in a teammate’s missed layup, the Cavaliers led 18-16.

Buckets by Troy Griggs and Owen McCormack put Davie back on top 21-18 at halftime.

North assaulted the glass with some passion in the third period, getting 10 second-chance points in the quarter to stay close. Quintous Smith Jr. knocked down a 3-pointer and Dayjuwon Cooke had a steal-and-dunk combination to help keep the Cavaliers close.

But Davie’s experience showed down the stretch, with Cooper Wall and Michael Walton delivering timely buckets. A wiggling layup by Wall gave Davie its biggest lead at 45-36 with 4:13 remaining.

“We got some good looks, got some layups off set plays,” Absher said.

North still wasn’t done and got within 47-43 on a dunk by Goodlett at the 2-minute mark.

But Davie (9-3) ran a play that freed Walton for an open jumper and a 49-43 lead with 1:49 remaining. That was a dagger. Then the 6-foot-8 McCormack grabbed defensive rebounds and calmly made free throws to finish off the Cavaliers.

“We lost two games, but this tournament can still be good for us if we use it the right way,” Unger said. “We played bigger schools, we played more experienced teams, but we never quit, we never stopped fighting. That experience should make us better.”

Davie gets ready to head into the Central Piedmont Conference tussles. As has been the case for Absher the last 16 years, the Moir event is a good measuring stick as to where the War Eagles stand.

“The three games in this tournament always prepare us,” Absher said. “And when you can win two out of three here, it gives you momentum.”

NOTES: Walton was named to the all-tournament team. “He was solid in every game,” Absher said … North’s struggles at the foul line continued. The Cavaliers were 7-for-16, while Davie was 8-for-12.