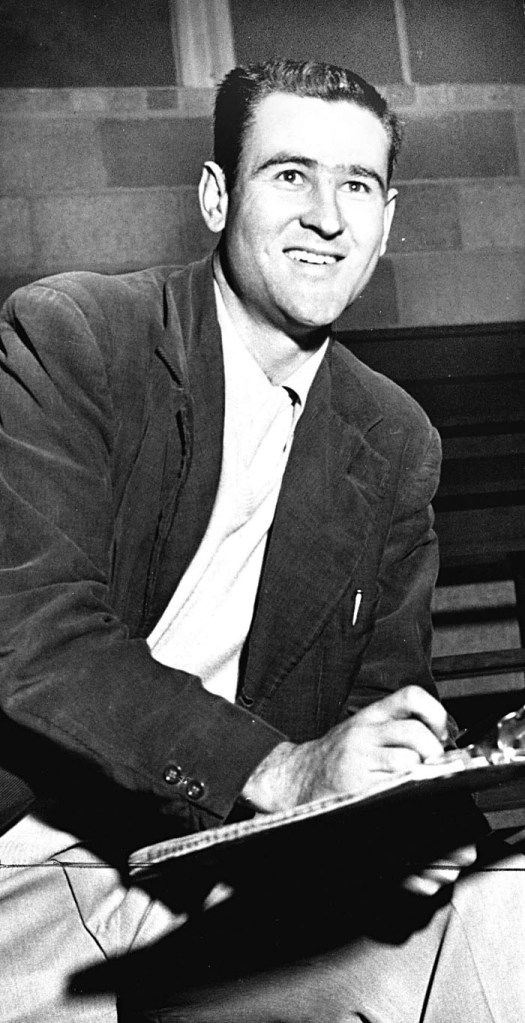 File photo ... Jack Ward, when he taught and coached during the early days of Davie County High School, Ward, a member of the Davie and Catawba College halls of fame, died last Friday.

MOCKSVILLE — Jack Ward, one of the icons of Davie County sports and a Catawba College Hall of Famer, died on Friday at 90.

Funeral services will be held this afternoon at 2 p.m. at First Presbyterian Church in Mocksville.

Among other feats, Ward played the last games of his college baseball career and the first game of his professional career on the same day.

That was May 15, 1951. Third-place Catawba College wrapped up a decent season in the North State League under coach Earl Ruth by winning a doubleheader against Western Carolina in Cullowhee, 12-5 and 8-1. Ward raced from that doubleheader to Mooresville, where he played for the Mooresville Moors in a Class D minor league game against the Concord Sports.

Ward had batted .298 in his four years as Catawba’s starting first baseman, including a .347 batting mark in 1950, but hits were harder to come by in the pro ranks. Ward got two hits in his second outing with the Moors, but he batted .180 in 26 games that summer. The good news was that his playing days were only a warmup for what was to follow. When the school year began in the fall of 1951, he was at Cooleemee School, and a legendary football-coaching career was launched.

Ward was an all-round athlete growing up in Thomasville, as one of seven children. When Catawba coach Gordon Kirkland came to recruit him, he actually wanted Ward mostly for basketball.

Ward played on Catawba’s freshman hoops team in the winter of 1944-45, and he was proud that he got to play twice against John “Hook” Dillon, in UNC’s “Tin Can” facility. Dillon would become a two-time All-American for the Tar Heels, earning his nickname with the unstoppable hook shot that he displayed against New York University in Madison Square Garden.

Ward’s athletic career at Catawba was put on hold by military service in the U.S. Army. Like many other fine athletes,  he returned after World War II to bring the school serious glory days.  Catawba’s football team won back-to-back Tangerine Bowls. Ward was a member of the 1947 team that won the Tangerine Bowl in Orlando against Marshall on New Year’s Day, 1948.

By 1951, Kirkland arranged a teaching/coaching job for Ward in Cooleemee and urged him to accept it.  Ward accepted it, although he didn’t tell his coach that Cooleemee’s football team would be operating out of the T-formation rather than the single wing formation that had won two Tangerine Bowls for Kirkland.

Ward coached Cooleemee football to overwhelming success. From 1951-55, Cooleemee went 43-5-1. Thanks to the backing of Erwin Mills, the team traveled first class and wore first-class uniforms. After a while, it wasn’t easy for Cooleemee to find schools to play. That explains why the last game Ward coached for Cooleemee was a road trip to Thomasville.

The consolidation of Cooleemee, Mocksville, Farmington and Advance schools into Davie County High came in 1956. Ward was chosen as the new school’s first athletics director and head football coach, with Mocksville’s Bill Peeler assisting him. That announcement appeared in the Post on May 18, 1956.

“I was the first person Davie County put under contract,” Ward said in an interview with the Post in 2006.

They were known as the Davie Rebels in those days, and Ward coached the school’s first victory against Kernersville on opening night, Aug. 31, 1956. A halfback named Richard Stafford scored the first TD in Davie history.

Davie was a member of the North Piedmont Conference. There were lean years, followed by decent years, and then outstanding years.

In 1964, Davie finished second in the NPC behind Mooresville.  In 1965, Ward had All-State end Ronnie Foster and a host of great backs and coached Davie to its first NPC championship. Davie won its first 10 games that year before losing to Asheboro, 33-19, in the Piedmont championship game. Ward always maintained that game was closer than the final score sounds, but Asheboro had Shrine Bowl QB Darrell Moody and the Comets also had more depth.

Ward served as Davie’s head coach for 12 seasons (61-51-9), while battling among others, Mooresville, East Rowan, North Rowan, West Rowan, and in his final season, North Davidson.

He coached the West all-stars in the East-West Game in Greensboro in the summer of 1967.

He said of his coaching days in that 2006 interview, “It was a great ride and I took it with great people.”

Ward did graduate work in administration at UNC Greensboro and UNC. In 1965, he added assistant principal to his many job titles at Davie. Three years later, he retired from coaching football and became Davie’s principal. He stayed at that post for 12 years.

Ward moved up the administrative ranks in the Davie school system, serving as associate superintendent from 1980-86, and then superintendent until his retirement in 1989.

In 2013,  Ward was the recipient of the Order of the Longleaf Pine for his extraordinary service to the state of North Carolina.

Since 1980, the most outstanding male and female athletes at Davie County High have received the Jack Ward Award.