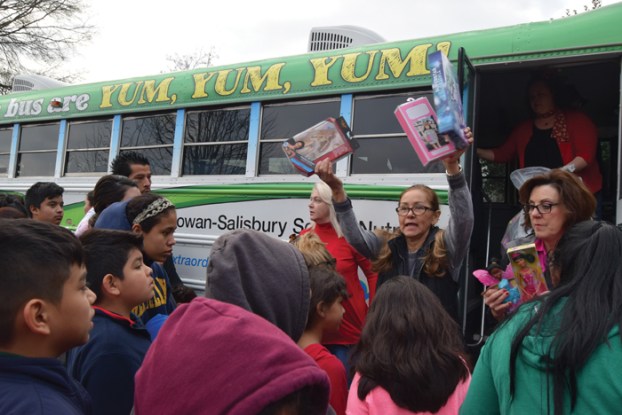 Rowan-Salisbury Schools staff collected and distributed thousands of toys to students Thursday morning in honor of Christmas. Demand was so great that staff members had to go shopping mid-event to get more toys. Rebecca Rider/Salisbury Post

Laurels to the many ways people in Rowan County reached out to help others this Christmas. Our modern-day gifts of the magi ranged from tried and true programs like the Salvation Army’s Angel Tree to new initiatives like the school system’s visits to neighborhoods that participated in the summer feeding program. School officials and volunteers distributed busloads of toys and food — all donated or bought with donated funds. The bike giveaway that Salisbury Police and Gerry Wood make possible generated a lot of excitement. And don’t forget the Christmas Happiness Fund vouchers that Post readers have supported for decades.

Post photographer Jon Lakey lost track of how many Santas appeared in his viewfinder, and the news staff could barely keep up with all the generous, newsworthy events. These and countless other acts of kindness helped financially struggling families to find joy in the season. People everywhere tend to be more giving at Christmas, but Rowan County’s outpouring of concern, gifts and contributions is truly remarkable.

Laurels to end-of-year donations. While Santa’s rounds are over, people are still considering 2017 contributions to nonprofit organizations. On Wednesday, the Post reprinted the Sharing the Season list of nonprofits and their needs and wants. If you’re looking for a way to share your blessings, that’s a good place to start. The late December check-writing rush may be precipitated by tax deadlines, but it’s still driven by unselfishness and benevolence.

Dart to the decline in charitable giving that many fear will result from changes in federal tax law. People who get a tax break in return for giving to nonprofits, churches and other religious organizations could see the value of that deduction disappear in 2018. They can take the new, higher standard deduction instead of itemizing deductions like charitable contributions.

In the short term, the lucky few may be able to double up on donations at the end of this year to take advantage of the existing law. That could give nonprofits a momentary boost. In the long term, the new law will put U.S. altruism to the test. Americans gave $390 billion in charitable donations in 2016. Will we be just as generous if there is no tax benefit?

A caution to survivors of sexual assault

By Katy Temple Special to the Salisbury Post The #MeToo movement is a call to victims of sexual assault to... read more