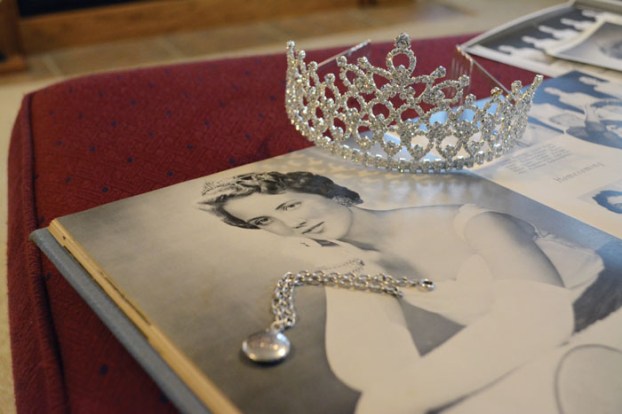 CHINA GROVE — Becca Rousey is the lone girl in a family with three grandsons. So Becca has always been close to her grandmother, Sharon Deal.

Sharon Deal received that same honor in the fall of 1958 at China Grove High School.

There she is, right there in the black-and-white pages of The Parrott, the school’s yearbook.

“I worked on the annual staff, and I was also a letter girl for three years,” Deal said. “I was three different letters.”

Bill always called Becca his “No. 1 princess,” and now she really is — although she’s probably the only homecoming queen you have to tell to comb her long, wavy hair before she has her picture made.

It’s fair, she says, to call her a tomboy. At homecoming, she wore a deep red strapless grown from A Perfect Dress in China Grove. But she’s more at home in jeans, a sweatshirt, and no makeup, her unruly hair in a ponytail.

“I looked like a boy growing up,” she says. “I’d wear a backwards hat. Who let me out of the house like that?”

Her older brother, Aaron, is a junior at Appalachian State University, where her cousins, Reece and Davis Beck, started this fall. She grew up four-wheeling and hunting alongside her brother and cousins.

Bill Deal bought shotguns for his grandsons when they turned 12 and did the exact same thing for Becca.

“Those boys haven’t done a thing she hasn’t done,” Sharon Deal says. “She absolutely has been right there with them.”

When Aaron started taking saxophone lessons, Becca decided she wanted to take drum lessons. She was the first girl on the drum line at Carson.

Her good friend Austin Pinion, a junior at Western Carolina University, came to surprise her for homecoming. He looked after her when he was a senior on the drum line and she was a freshman.

Becca learned of her nomination to the homecoming court at band practice one afternoon, she says.

“I was just shocked to death. The senior class voted on all of us.”

Becca said she didn’t do any campaigning. But, she says, “I had the whole band behind me. I really was not expecting it. My heart was beating so fast. I do not have a good surprise face. I should have practiced it before I won.”

Becca, who was escorted by her dad, Mitch, has been a member of the band for four years. At South, where Aaron was a student, she played in the pep band in seventh and eighth grade.

At Carson, she’s also a member of the National Honor Society. She works at Starbucks at Wallace Commons.

“Becca is probably one of the most outstanding drummers we’ve ever had at Carson,” says band director Jeff Street. “This honor was very well deserved for a kid who’s helped the band get to where it is today. I’m just so proud of her. She’s one of those kids who can make things happen.”

Becca had planned to change out of her gown after halftime but didn’t get back to the stands until fourth quarter. So she picked up her drumsticks and went back to work.

“The guys on the drum line said, ‘Make way for the queen!’” Becca says, grinning. “I got a lot of congratulations.”

She also got all her food free at the concession stand that night. After the game, she changed clothes and went to a bonfire — nothing special, she says.

Later, she learned that her grandmother had also been homecoming queen.

“I thought it was kinda cool,” she says. “We have something else in common now, something new.”

Becca has applied to Appalachian, Western Carolina, and the University of North Carolina at Wilmington. Appalachian is her first choice, she says.

“I just wonder if Appalachian can stand all four of Billy Mack’s grandchildren at one time,” Sharon says.

By Susan Shinn Turner For the Salisbury Post SALISBURY — Dr. Amy Wilson is only 5 feet tall, but she’s... read more