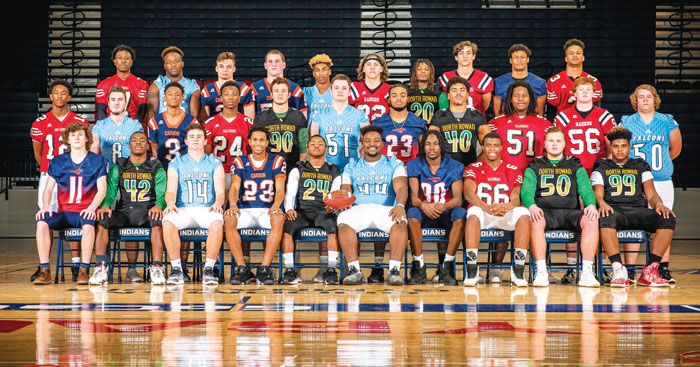 SALISBURY — A down season for Rowan County football teams. When no one is conference champion — or conference runner-up, even — it’s a down season.

When the season is over after the first round of the playoffs, it’s a down season. This was the first time since 2002 that Rowan didn’t have at least one team advance to the second round.

South took a step forward. Salisbury took several steps forward. North won eight games. West was only 6-6, but the Falcons still rolled in every county game. Carson was supposed to be awful, but the Cougars won three and almost won two more. East sent its seniors out with a victory.

As far as individuals, there were plenty of good ones.  The two first team all-county running backs can play for anyone and accounted for 37 touchdowns.  Rowan boasted a 2,000-yard passer and a 1,000-yard receiver. The county was stacked with  linebackers deserving of first team honors.

Putting the all-county football team together is a job with three components. First, try to get the most deserving players on there. Second, piece together a team by position. A team that could line up and actually play a game. You don’t want six quarterbacks and two offensive linemen. You don’t want eight linebackers and one DB. Third, put together a squad that represents each school but also reflects the season. North, Salisbury and West won a lot more often than Carson, South and East. Logically, they should have more all-county players.

Coaches nominated players from their teams. The Post sports staff took it from there. Please note there’s also a second team for the third straight year.

The numbers for the 31-man first team: West (7), North (7), Salisbury (6), East (4), Carson (4) and South (3).  There are three extra defenders, guys who needed to be on the team but also guys who helped make the team numbers proportional. Call it a tie for the last linebacker spot, the last defensive line spot and the last DB spot.

Receivers — West’s Jalen Houston had a huge season that went hand-in-hand with Stolsworth’s. He had eight TD catches in West’s first four NPC games.  Trell Baker (nine TDs) was the big-play guy for Salisbury. Carson’s Jamarius Hairston, a senior making his varsity football debut, soared for eight TD catches for a team that didn’t throw much.

Offensive athlete — QB Cole Sifford was the heart and soul for Carson’s efforts. He was at the top of coach Joe Pinyan’s all-county nominations.

Linebacker — Christian Bennett was the leader of East’s defense. Salisbury’s Nick Austin was a sure tackler in the middle, while Salisbury youngster Jabril Norman created havoc off the edge. North’s Tyzai Lyles produced 15 tackles for loss and three fumble recoveries.

Defensive athlete — West drop-end Brandon Wallace was all over the place. He led the county in tackles and had a two-interception game against South Rowan.

Specialists — South’s Kory Sellers is the return man. The punt he took to the house decided the Thomasville game. He accounted for 1,100 yards. East’s Gabe Hinceman was an accurate placekicker and also had four TD catches as a receiver. Carson’s Andrew Bradshaw was in a league of his own as a long snapper. North punter Jacob Young averaged 46.7 yards and made the AP All-State team.