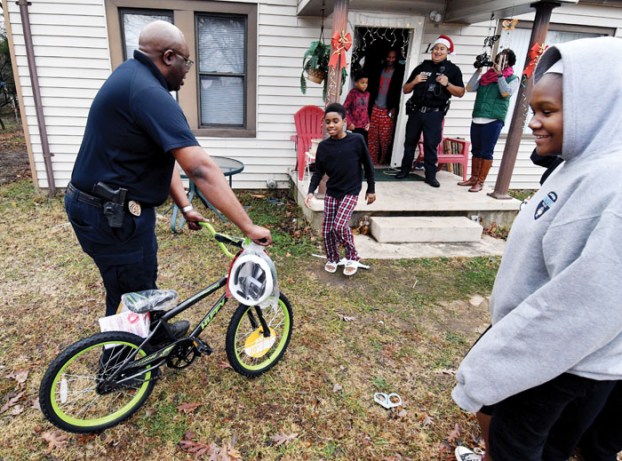 Zay'Vien Heaggins (9) comes out to receive his new bike from SPD Officer Isaac Miller. Gerry Wood Auto Group teamed up with the Salisbury Police Department to give out 140 bicycles to area youths just in time for Christmas. Jon C. Lakey/Salisbury Post

SALISBURY — It took a little creative thinking for Aaron Holsey to not ruin the surprise that his son, Zay’vien Heaggins, was getting a bicycle for Christmas.

The 9-year-old has talked about getting a bike since August.

On Thursday morning, Salisbury Police Department Officers Isaac Miller and Joe Martinez delivered a bicycle purchased by Gerry Wood Auto Group. This is the 16th year the dealership and police have partnered to give bikes away.

The dealership provided 140 bicycles, 140 teddy bears and more than 1,000 candy canes for eligible children whose parents signed up in October with the Police Department.

Holsey said it’s been a little hard this year because he’s had jobs and lost them.

“It means a lot. He’s been asking for a bike,” Holsey said.

Holsey said his son didn’t know he was getting a bicycle and it was a little hard keeping the secret. Holsey said every time Zay’vien asked for a bike, he would change the subject or bring up what other gifts he wanted.

Mary Fox said she is appreciative of the bicycle for her grandson, Sinciere Fox, 11. She’s unemployed and keeps him a lot, she said.

“It means a lot. It means I can pay my light bill,” she said.

Fox said she also will be able to give her grandchildren a good Christmas dinner.

Cassondra Walker’s four children — Jontae Walker, 9; Jamier Duren, 7; Ja-Tarit Torrence, 5; and Jamesche, 13 — all received bicycles. The younger children couldn’t wait to ride their bikes around the yard. They were so excited they didn’t bother to remove the paper tags on the wheels.

She said although she’s not really an outdoorsy type of person, she will go walking while the children ride their bikes.

“We can walk together. They like the outdoors,” she said.

Brenda Wood said her family is grateful to tho officers, Police Chief Jerry Stokes, cadets, chaplains and other volunteers who gave their time for the project.

Abbey Beam, whose father is police Lt. Greg Beam, has volunteered since she was 5 years old. The 13-year-old said she enjoys seeing the children react to getting a bike.

“I get to see how it affects the kids,” she said.

Her friend Chloee Stoner has joined Beam in volunteering for the past three years.

“I love doing it because I love to see the little kids’ faces light up,” Stoner said.

“There are people who don’t get a lot for Christmas, and I love to see them happy,” she said.

Master Police Officer Annice Chunn, who is the community relations officer for the Police Department, began planning this year’s giveaway in October. This is her fourth year participating.

“Even if I didn’t (organize it), I just love to see the smiles on the children’s faces. This kicks off the Christmas holiday for them. This is so much fun,” Chunn said.

She said many officers even volunteer on their days off.

SALISBURY — Shania Lugo has been caring for her niece Aniyah since the 4-year-old was just 8 months old. This Christmas,... read more