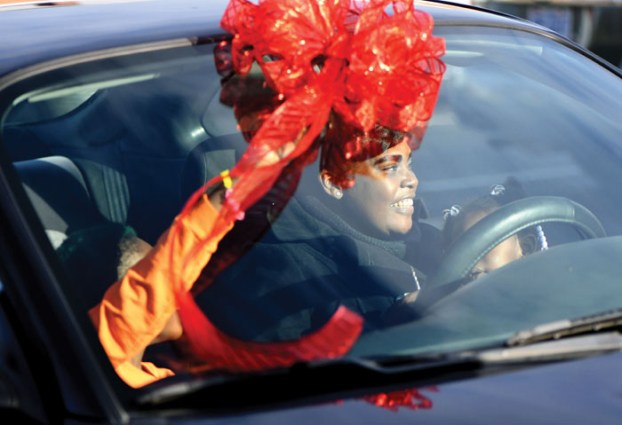 Single mother Christina Turner has been praying for two years for a car so she would not have to rely on public transit to carry her to the grocery store and doctors appointments for her and her two children. On Thursday, Molly Bronson donated her personal vehicle, a 2001 Ford Escort, to Turner. Jon C. Lakey/Salisbury Post

SALISBURY — Christmas has arrived early for Salisbury native Christina Turner, who after several years of relying on the Salisbury transit system was given a car by a local family she’d never met.

Turner, 34, a single mother of 11-year-old Jamir and 2-year-old Paris, has spent much of her day riding the bus everywhere. She often missed out on activities with her children because she didn’t have a reliable way to get around.

On Thursday, Turner, her children and her father, Jimmy, drove out of the parking lot of the Pregnancy Support Center in a 2001 Ford. She’s been going to the center on South Main Street since before her daughter was born.

“This is a very big deal. I’ve been praying for this for two whole years,” said Turner, keys in hand.

At the center, Turner has one-on-one sessions with peer adviser Laurie Shuping, where they talk about parenting and pregnancy.

Through the programs offered at the Pregnancy Support Center, Turner also has received clothing, diapers, formula and other items for her daughter. She also gets referrals to other local programs.

“I’m very appreciative of the center for everything they do,” Turner said.

For two years, Turner and Shuping typically meet for an hour every other week. At the end of each session, the two have prayed about getting her a car.

Six weeks ago, Molly Bronson posted on Facebook that her husband, Lee, was getting a car and they wanted to give his older car to someone or an organization. A friend saw the online post and asked at the Pregnancy Support Center if it was possible to accept a car to give to a client.

“We wanted to bless someone,” Bronson said.

Shari Evans, executive director of the Pregnancy Support Center, said she at first didn’t know if the center could accept the car and turn it over to a client.

“For the last two years, she’s been praying that God would provide her with a car. It will allow her the freedom to do things with her kids that her heart longed to do,” Evans said.

Evans said as soon as the center staff began discussiing the car, Turner came to mind.

“It’s been my great honor and privilege,” Evans said of facilitating the gift.

Evans said she hasn’t been able to sleep because she’s been so excited about the car.

Bronson said she is happy that the car will allow Turner more freedom to do things with her children.

“It’s amazing how God worked it out for us. I posted the question, and he took it from there,” Bronson said.

She said a car is something that can be taken for granted, but it can be a blessing for someone without one.

“It’s been incredible to watch him put the pieces together,” Bronson said.

“I’m so very grateful to her and her family,” Turner said of the Bronsons.

The couple weren’t the only ones who helped Turner. Evans said a donor paid for her insurance for the next six months, gave her gas cards, had the inside and outside detailed, and the car inspected. Donors also gave Turner’s children Christmas gifts.

Evans said she contacted Ralph Baker Shoes and told the owner about Turner, who, because she walked so much, had worn out her shoes. Baker donated some shoes. She also received a child safety seat for her daughter; she never needed a car seat when she was riding the bus.

Evans said Turner confided that if her son had a doctor’s appointment, she spent much of her day waiting for a bus. If he missed the school bus, she had to figure out a way to get him to school.

“Those things mean the world to a mom, worrying about him getting to school,” Evans said.

Evans says she hopes the car will provide the momentum Turner needs to propel her forward.

After embracing Bronson on Thursday, Turner was given the keys. She raised her hand in the air, closed her eyes and thanked God.

Turner said she’ll now be able to help her mother and father get to their doctor’s appointments.

As to the first outing she and her children will go on in her new car, Turner said she’ll take them to the movie theater on Christmas Day.

As she drove out of the parking lot, she gave one final wave to the group, which included center staff members and the Bronsons and their three daughters.

SPENCER — Though they each had three Polar Express performances ahead of them Wednesday evening, 11-year-old twins Jimmy and Jacob... read more