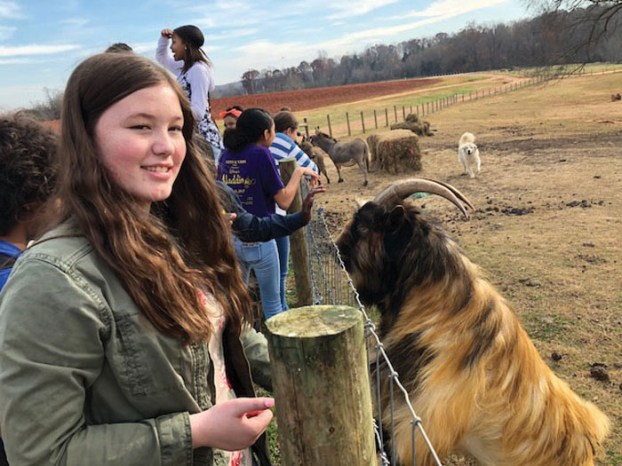 Angelia Fleming's eighth grade AIG class recently got a chance to explore all the West Rowan area has to offer — including Patterson Farm. West Rowan is the class's second stop on an extended tour of the county. Submitted photo

By Angelia Fleming and her eighth-grade AIG students

CLEVELAND — As North Rowan Middle School’s eighth-grade AIG class continues its journey to explore communities in Rowan County, students were excited to discover the rich experiences and qualities of the West Rowan area.

The class’ first stop was West Rowan High School, where the students were welcoming and informative. Their chorus sang for North Middle students as they walked into the chorus classroom. Talk about feeling welcome!

West Rowan students knew a lot about their school and its programs, and they were intrigued with what they were doing. It always seemed new, interesting and an exciting exploration of knowledge for all the students.

The class had several highlights from West Rowan High School. Students got to learn about interesting projects in welding class and to see firsthand how West Rowan’s horticulture program works. Did you know that they actually use the vegetables they grow in their cooking class?

Many North Middle students enjoyed interacting with the animals. They got to hold bunnies, pet goats and cows, and learn about the animals and West Rowan’s program. West Rowan students even have the opportunity to take home animals and care for them.

After exploring the inside of the school, North Middle students walked behind the tennis courts and the pastures of animals to learn about the activities the students did with their land. It was interesting how students were able to use everything they had at their disposal.

From a distance, a couple of students could see an obstacle course. They were told that it is used for JROTC. One student asked if he could try to run it — and so the games began. Students started running across beams. Then the students, neck and neck, crawled under the next obstacle. More and more students joined the fray. They all stood in awe as they faced their largest challenge, an 8-and-a-half-foot wall. Three students attempted to climb the wall but failed. Determined, these persistent students took steps back in unison, and one after another they cleared the challenge.

After an exhilarating high school experience, the class visited Mount Ulla Elementary School. As they checked in at the office, students were warned to watch out for the gingerbread men that had gotten loose on the building.

After successfully evading the gingerbread men, the class went to the lunchroom and ate lunch with elementary students. Younger students asked if the visitors wanted to play soccer with them, and the visitors agreed. After lunch, North Middle students went to the playground for kickball, soccer and more.

The elementary school students even asked for the middle schoolers’ autographs. This was a glowing moment for many of the students, and it was a moment rich with nostalgia.

Thyatira Presbyterian Church is a historic gem that has been updated over time. The church has been here for more than 250 years. According to Glenn McCorkle, North Middle’s guide, it is the oldest church west of the Yadkin River. The building includes a cemetery and museum.

McCorkle was knowledgeable about the history of the church. The first stop was inside the church, and students got to see every pew and were able to see one of the giant organs. Thyatira Presbyterian still uses some of the original pews.

According to McCorkle, the church used kerosene lamps until members feared that somebody would use them to burn the church down.

The abbey houses the graves of many famous families — such as the Locke family and the Jefferson family. Students were interactive with the tour guide, having conversations about the gravesite, the historical figures themselves and the Revolutionary War.

The class then visited the museum. It was formed when the church ran out of space for its many historical donations. To fix this, a couple built and financed a museum from scratch. The museum is filled with old instruments, furniture, pictures and more. This is a mere glimpse of what students experienced at Thyatira Presbyterian Church — who knew how interesting a historic church could be?

Bunnies and goats and chickens, oh my!

The class continued its experience with animals when it traveled to Patterson Farms. When students heard a donkey bray, they turned and saw the barn full of animals and their faces lit up like Christmas trees. Students loved the animals at Patterson Farm. Several of them wanted to take bunnies home with the. Sadly, Mrs. Fleming said no.

When they walked in the greenhouse, students were greeted to a display of poinsettias that was like a vivid bouquet. The owners generously gave students free ice cream.

The class loved Patterson Farm, and it was a great way to top off the day.

By Mark Wineka mark.wineka@salisburypost.com SALISBURY — An Amtrak train struck and killed a man on the tracks near East Harrison... read more