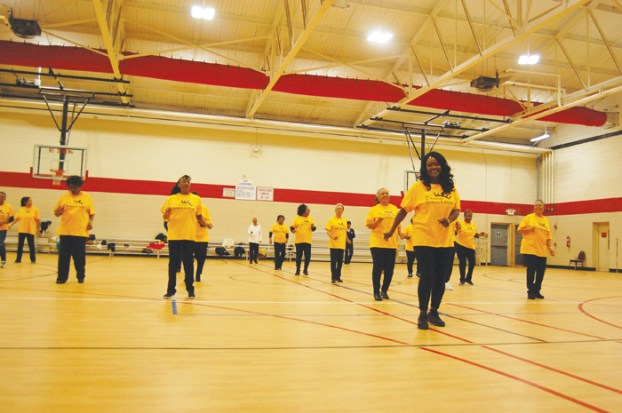 SALISBURY — Crystal Miller had never danced before she started coming to the biweekly meetings of the Dancing Queens and Kings of Salisbury.

“I love it. I love learning with them,” she said.

Because the group is oriented toward people over 55, Miller — who is in her 40s — is the youngest member of the group.

She said she joined about two months ago because of her mother-in-law, Henrietta Miller, who has been a part of the group since is was started in September.

“So I’m dancing for her. So I enjoy it because of her,” Crystal said.

Henrietta has been in a motorized wheelchair since she had a stroke and an aneurysm in 1996. She said her favorite part of the group has been the fellowship.

“I am not able to dance like they dance, but I dance my way in my little wheelchair,” Henrietta said.

Crystal and Henrietta are two of the 25 women and men who call themselves the “queens and kings” of dancing.

On the back of their yellow team shirts, members’ first names are printed after honorary titles.

Levonia Corry, or “Queen Levonia,” said there are several reasons she enjoys dancing.

“No. 1, it’s healthy for all of us. We all need physical fitness. And this is one way of getting fit and staying healthy,” Corry said.

She said she also enjoys the “atmosphere” of the meetings, which are at Hall Gym from 10 a.m. to noon Tuesdays and Thursdays.

“We all get along so well together; we are all smiling and we’re all hugging one another and we just have a great time getting fit,” Corry said.

Parks and Recreation Director Nick Aceves said Salisbury has many active older adults who need things to do.

“The baby boomers, they’re here and we have to have opportunities for them,” Aceves said. “Like Mae (Carroll) and a couple of other people have said, bingo is fun, but that’s not all they want to do.”

Carroll was the driving force behind starting the Dancing Queens and Kings. As a member of Healthy Rowan, she was looking for a way to get older people active.

“(Healthy Rowan) found out that … out of all of the counties around, we’re on the bottom as far as health is concerned,” Carroll said.

Aceves said that once Carroll came to him with the idea for a dance class, he was able to get a senior dance group from Reidsville to visit Salisbury. That group, he said, gave Carroll and the first few group members tips on how to get the team started.

Almost four months later, the group is growing every week.

Carroll said she doesn’t want the team to get larger than 25 people. It reached that limit several weeks ago. Carroll said she hopes the group can continue expanding, which may mean creating another team.

“Queen Dianne” Alexander, for one, is excited for more people to join the program.

“Dance class is a good form of exercise for anyone with tight joints or anything,” Alexander said. “…Plus, you can lose weight at it. I’ve lost 10 pounds since keeping myself moving.”

Her advice for people 55 and older: “Welcome. Come on, get loose, let’s dance.”