‘Thrillers! An evening with John Grisham and John Hart’ Feb. 23 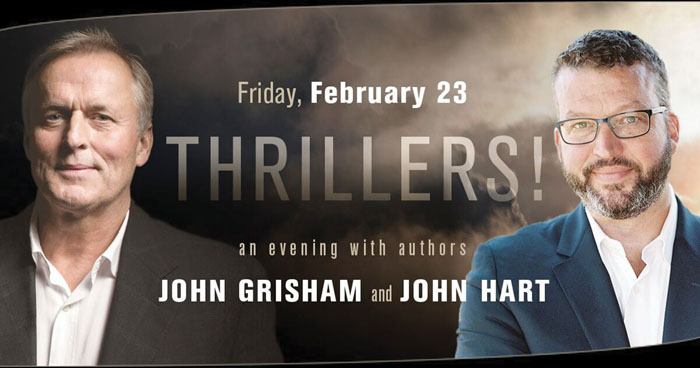 RALEIGH — Novelists John Grisham and John Hart will headline “Thrillers!” on Feb. 23 at the North Carolina Museum of Natural Sciences in Raleigh.

The program will be presented by the museum along with WRAL-TV, Business North Carolina magazine and the North Carolina Humanities Council. It will be a 7:30 p.m. at Meymandi Concert Hall and will be moderated by D.G. Martin, host of UNC-TV’s “North Carolina Bookwatch.”

“We are so grateful to John Grisham and John Hart for kindly donating their time and spending an evening with Raleigh on behalf of the N.C. Museum of Natural Sciences,” said Susi H. Hamilton, secretary of the N.C. Department of Natural and Cultural Resources.

Hart’s novels take place in his native North Carolina. With five New York Times bestsellers to his credit, he was the first to win two consecutive Edgar Allan Poe Awards for Best Mystery Novel — for “Down River” and “The Last Child.” Two of his novels are in development as feature films.

The “Thrillers!” program will mark the national launch for his latest novel, “The Hush,” which builds on “The Last Child.”

All tickets will include an inscribed hard-copy edition of “The Hush” ahead of its scheduled Feb. 27 release.

Long before his name became synonymous with the modern legal thriller, Grisham was working 60 to 70 hours a week at a small Mississippi law practice, squeezing in time before going to the office and during courtroom recesses to work on his hobby — writing his first novel.

Now, Grisham’s novels have been translated into 48 languages and sold more than 300 million copies worldwide. “The Firm,” his first bestseller, sold more than 7 million copies and was adapted into a feature film. Eight others, including “The Client,” “The Pelican Brief,” “The Rainmaker” and “A Time to Kill,” have also been adapted into films. His 25th and newest legal thriller, “The Rooster Bar,” was released in October.

Before the writers’ discussion, paleontologist Lindsay Zanno will talk about “thrillers” from the world of dinosaurs. Zanno is head of paleontology at the Museum of Natural Sciences.

With more than 20 years of international expedition experience, Zanno has a soft spot for the American West, where she discovered new species, including Siats meekerorum, one of the largest meat-eating dinosaurs on the continent.

Proceeds from the program will benefit the nonprofit Friends of the N.C. Museum of Natural Sciences in support of dinosaur research and education.

More information and tickets — both for theater seating and a 6 p.m. reception with the authors — are available at naturalsciences.org/thrillers.