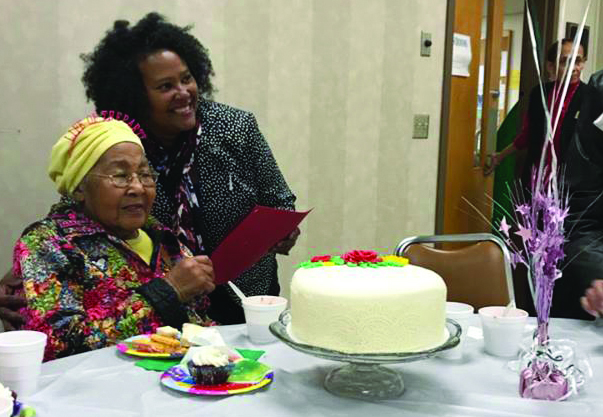 Rufty-Holmes Senior Center was the scene Friday for a drop-in 95th birthday party for one of its most loyal patrons through the years, Ruth Booker.

Booker, who in the past has been referred to as the “hat lady” and always wears one of her self-designed turbans, turned a corner Friday and found a roomful of friends waiting to wish her many happy returns.

Booker still attends chair yoga classes three times a week at the senior center and is a faithful member of the AARP chapter that meets there. She had just finished her yoga session Friday morning when the birthday surprise happened.

Her daughter, Eleanor Qadirah, handled many of the arrangements and invitations. Among the guests were Booker’s only surviving brother, Richard McBride of South Carolina, and Salisbury Mayor Al Heggins.

Booker grew up in Chesterfield, South Carolina, as the third of 11 children. She moved to Salisbury as a teenager to take care of a sick aunt. For several years as a young woman, she lived in Philadelphia and New York before moving back to Salisbury.

Here, Booker worked as a caregiver and seamstress. She made dresses, blouses, coats and hats and for years did alterations for stores such as Belk Harry and Purcell’s. She also created window displays downtown.

Qadirah said her mother is still making hats and doing alterations. Booker is a former beauty queen of the J.C. Price American Legion Post and, in the 1970s, was co-founder with Alane Privett of the Rowan Craft Association.

She was a top-notch bowler in her day and used to enjoy playing pool at the senior center.

At Friday’s drop-in celebration, Booker wore a tiara that said, “Life of the Party.”

Booker has been wearing her signature turbans since 1965. She used to spend so much time at the senior center, Qadirah considered her the center’s mascot and she always has been its greatest ambassador.

Booker lives with Qadirah, who takes turns with friend Marianne Orr getting Booker to the senior center. Better Loafing catered the drop-in, which included tomato bisque.

For years, a sure sign of Christmas for Salisburians was the display of Main and Innes street lights downtown, as... read more