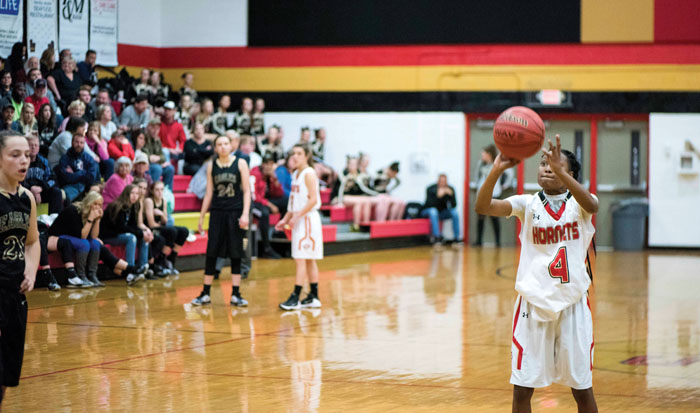 SALISBURY — It came down to a whistle, really.

Troutman is long, athletic and aggressive, and on this play she also was lucky. She was boxed out, but somehow she got the critical offensive board and stuck in a spinning layup for a three-point play as she fell to the floor. That was the moment that sealed a 45-40 Central Carolina Conference victory for the Hornets.

“It was a call that could’ve gone either way,” winning coach Lakai Brice said. “Bryanna used her length to her advantage, and it worked out for us.”

East Davidson coach Don Corry has been around the block a few times, and he was certain there was no way Troutman could have gotten that rebound without fouling.

“Unfortunate,” Corry said. “But I’ve got nothing but praise for how hard our girls played. We got after it.”

Both teams did. There’s a reason both teams came into the game unbeaten.

It was tough for either team to score. Corry had Salisbury (6-0, 6-0 CCC) scouted well and game-planned to frustrate the Hornets’ three scorers.  The Golden Eagles (8-1, 5-1 CCC) face-guarded Salisbury shooter Maria Capito, determined not to let her be a factor.  Troutman was automatically double-teamed and even triple-teamed if she touched the ball within 15 feet of the basket. East Davidson played Salisbury’s quick, ball-handler Anayia Fulson for the drive and basically just ignored the other two Hornets on the floor.

Only Salisbury’s big three scored in the first half. In the second half, Glenn, Tacorra Robinson and reserve Ke’shaia Daniels came through with difference-making buckets. Glenn, the smallest person on the floor, also contributed six rebounds.

“We not only got big plays tonight, we got them from different people,” Brice said. “That was the best thing about this win. Even on a night when a lot of things didn’t go right for us, we found a way. We still found a way.”

It was 9-all after a bruising first quarter in which Troutman, who finished with 23 boards and 10 steals, carried the Hornets with her offensive rebounding.

East Davidson took a 13-9 lead early in the second quarter, but then Capito got loose for a 3-pointer, Fulson slapped a ball loose for a breakaway, three-point play. Then Fulson fed Capito for a layup. That 8-0 run propelled the Hornets to 22-18 lead at halftime.

“We knew it was going to be this type of game,” Corry said. “We really fought, but we just weren’t shooting the ball well enough. Salisbury’s defense contributed to that. They made us rush.”

Salisbury pushed ahead by 10 points in the third quarter, but ED shooter Brooke Anders (four 3-pointers, 18 points) buried a left-wing 3-ball right before the horn to cut the Hornets’ lead to 37-30. Capito scored in different ways in that quarter, showing a more versatile offensive game than she gets credit for.

“The 3-pointer is always going to be my shot, I’ve really worked hard on being able to fake the 3 and step in and shoot a 2,” Capito said. “I don’t want to be just a shooter. I want to be a good all-round player.”

East Davidson scrapped within 37-34 with six minutes left when Troutman made a fine pass to a cutting Robinson for a three-point play. That slowed East Davidson’s surge and was one of the biggest hoops of the night.

“It was a night when my shots weren’t falling, so I had to look for my teammates,” Troutman said. “Tacorra stepped up, Jinika stepped up.”

Robinson fouled out with 4:22 remaining, with the Hornets clinging to a 41-38 lead. Then both teams missed opportunities.

Fulson cashed in the front end of a 1-and-1 opportunity with 48 seconds left for a two-point Salisbury lead.

East Davidson missed a chance in the lane with 23 seconds left, and Troutman collected the rebound after a scramble. With 20 seconds left, the Golden Eagles made Glenn go to the foul line. She made her first free throw. When she missed the second, Troutman sailed in for her decisive offensive rebound and bucket.

“I think we were all a little nervous before this game,” Capito said. “But in the second half, everyone played with a lot of confidence.”

East Davidson held Troutman to nine points, That acrobatic, controversial bucket at the end accounted for her only points of the second half. Fulson also was held to nine, but Capito got 14.

“We had a girl (guard Brooke Kinley) whose only responsibility was to keep Capito from getting shots, but she still got wide open a few times,” Corry said.

It was a huge week for Salisbury, wins against Ledford and East Davidson, previously unbeaten squads that Corry believes are among the best in 2A.

“I don’t think we’ve played our best yet,” Troutman said. “Let’s see how good we are at our best.”