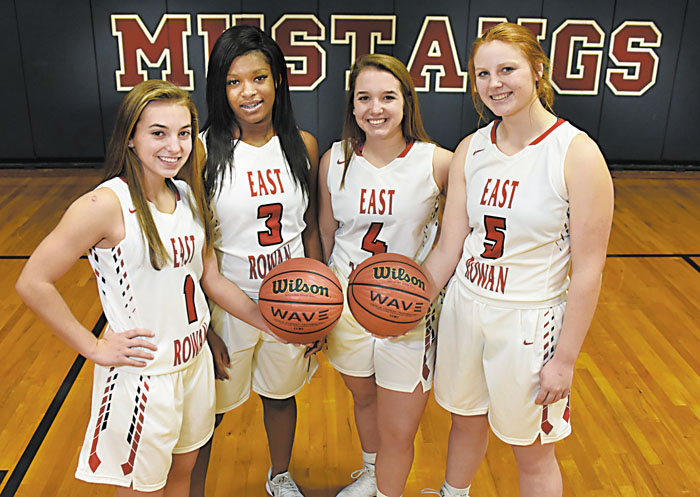 Mustang Girls at a Glance

GRANITE QUARRY – Entering his second season at the helm of the East Rowan girls’ team, head coach Kevin Holland faced an unanticipated challenge: It was all about numbers.

After last season concluded and through a full slate of summer workouts, Holland thought he would have eight experienced players returning to anchor his team this season. But stuff happens.

One player decided not to play, one transferred to another school, two others decided to concentrate on other sports. Then the top five players from the unbeaten team across the street at Erwin Middle School enrolled elsewhere.

That left the Mustangs with four returning players, only one senior, and four more players up from last year’s junior varsity. Then, one of them (junior Nicole Fleming), was lost to the season with an injury.

So with an iron-women squad of seven, the Mustangs embarked on a new season November 17.

“I am too dumb not to be optimistic,” said Holland with a shrug. “I have a returning starting point guard (Adalie Harrison), a senior guard who wants to be a leader on and off the court (Hollie Harrison), my most athletic player (Zynoria “Z” Winford) and a hard working sophomore (Caroline Houpe) with a full season of varsity experience. I will focus on the players I have and not worry about the players who are not here.”

The top returner is sophomore point guard Adalie Harrison, who led the team with a 7.6 average and is a strong ball handler who made honorable mention all-county least year.  “Adalie played well beyond her years as a freshman,” Holland said. “She is going to have to go even farther this year.”

Her sister Hollie, a guard, is the lone senior on the team and is a tough perimeter defender and averaged 3.5 points last year. Junior guard Winford, averaged 3.6 points last season and has the quickness to lead the Mustang transition game. Houpe, a 5-6 sophomore in the post, averaged 3.4 points. She should be one of the team’s strongest rebounders.

“Obviously, we are going to count on all seven of our players to step up and contribute,” Holland said. “We don’t have a lot of depth or size so we are just going to have to play smart, play hard and manage our time outs well.”

East claimed a signature win over North Rowan in the Sam Moir Christmas Classic last December, but then closed the season on an 11-game losing skid. The team has moved out of the rugged South Piedmont conference this season and into the six-team North Piedmont conference. They face familiar league foes in West Rowan and Carson plus Statesville, South Iredell and North Iredell. League play does not begin until January so East has time to get ready for games that really count.

“Our players know we have our work cut out for us,” Holland says. “We will have to work hard and get into the best condition possible.”

The season so far: The lack of depth showed when East opened the season with losses to Central Davidson, 45-34 and Central Cabarrus, 51-45. In both games, the Mustangs led in the second half, but faded down the stretch. A loss at Northwest Cabarrus, 50-33, was especially costly as Winford suffered an injury and is out for an undetermined period of time. Junior varsity player Lydia Miller has been called up to fill the void. Despite the growing adversity, East put it all together on Dec. 1 with an impressive 44-27 home win over Mount Pleasant to improve to 1-3. Mitchell and Adalie Harrison notched 11 points each in that contest. Earlier this week, East lost at A.L. Brown, 50-30, with Eagle leading the scoring with eight points.

Hollie Harrison:  5-2, Sr. G – The most experienced returning player and only senior on the team, she is the vocal leader of the team and a strong perimeter shooter and defender.

Adalie Harrison: 5-0, Soph. PG – Despite her size, Harrison quickly proved last season she had the skills and quickness on to run the fast paced offense. Her ball handling skills and speed will be counted on offensively and defensively.

Zynoria Winford:  5-5, Jr. G – very athletic and the out front attacker in transition for the Mustangs. Her quickness and footwork make her effective in pressure defense situations. She is sidelined for now with an injury suffered in the team’s third game this season.

Caroline Houpe: 5-6, Soph. F – A part-time starter last season, Houpe showed a strong inside presence and good rebounding ability. She will be counted on in the middle this season as a scorer and a defender.