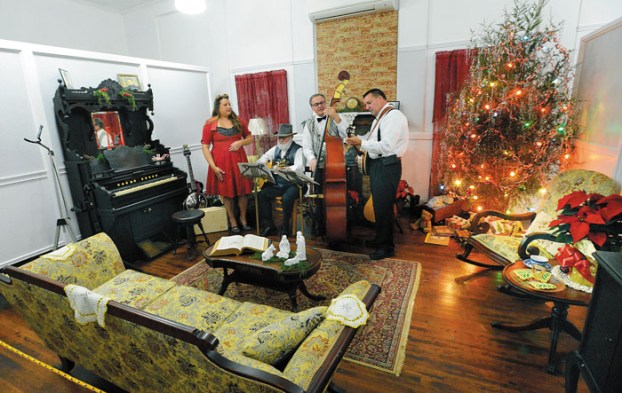 The Price of Freedom Museum opened its "Christmas on the Homefront" 3 room WWII era display with traditional Christmas music by the "Strings of Victory" group providing music. They are Madison McCorkle, Hubert Furr, Donnie Miller, and Jeff McCorkle. The sofa came from Hilda Gobble's grandmother's home and the organ on the left was donated by M.D. McNight. Wayne Hinshaw/For the Salisbury Post

‘Christmas on the Homefront’ takes visitors back in time

CHINA GROVE — Price of Freedom Museum founder Bobby Mault has been planning its newest room since the museum’s beginning.

Pointing toward the front of the museum, Mault said, “When we started down on that end, my vision was, at the end … to make three rooms out of it. So when we got through the Marine Corps room, you left the military behind and then you stepped into the home life that we lived during the war.”

Mault’s military memorabilia museum has a room for each of the four branches of the military — Army, Navy, Marine Corps and Air Force — and a “Do you remember?” room from different war eras.

Now the museum, which has been in the old Patterson Elementary School building since 2006, has a new room: a World-War-II-era replica home.

Mault said he did not serve in a war himself but that four of his brothers did.

“I was 8 to 12 years old during the war, and I’d always sit out there on the wall waiting on the mailman just to see if (my) brothers would write home,” Mault said.

At the time his brothers were serving in World War II, Mault’s family lived in a house on the land where Porky’s now sits in China Grove.

Mault said the replica home in the museum reminds him of that home, which he lived in from 1938 to 1948.

“I got in there the other night and I cried, you know? I was 8 years old again,” he said.

Mault said he even heard his father talking to him.

“He said, ‘Get up off that chair and get out there and do that work I told you to do,” Mault said, laughing.

The room was designed by Eva Millsaps, who met Mault when she sang at a Price of Freedom event several years ago.

Millsaps, who is a self-proclaimed antiques lover, said historical items like the ones in the replica home need to be preserved.

“I mean, modern gadgets wear out, people throw them out, but this, you know, people keep and they have memories attached to them,” Millsaps said.

She said that during the first day of Christmas on the Homefront last Sunday, she heard several people say that they recognized items in the room.

Millsaps said that in the World War II era, most families who lived in farmhouses like the one depicted would have decorated for Christmas sparingly.

“Coming from the Depression, they didn’t have a lot. So it would be just basically where the family was going to gather in the parlor. But we, you know, put poinsettias and stuff in some of the places, and I brought out some dolls to put on the bed,” Millsaps said.

She said she wanted the room to “cause people to remember the good times in their lives.”

“You know, that’s what the purpose of it is, to dig back in and brush off the cobwebs and just relive what was precious,” Millsaps said.

Christmas on the Homefront will return from 3 to 6 p.m. this Sunday at the Price of Freedom Museum, located at 2420 Weaver Road in China Grove. There will be performances by Madison McCorkle, refreshments and a special Pearl Harbor display in the Navy Room.

Mault said he will leave the Christmas decorations up for a bit after Christmas.