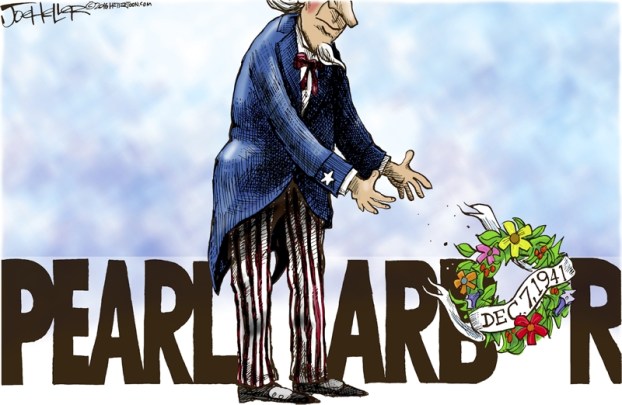 On this Pearl Harbor Day, the story of my father, now deceased, provides a link between two ships, the USS Maine and the USS Arizona, which suffered a similar fate in different wars.

My father was born in 1898, the same year the USS Maine was blown up in Havana harbor, taking 266 sailors to a watery grave in the most epic event of the Spanish-American War. My father served in World War I on the replacement ship, the USS Maine II.

A man named Howard Keniston also served in World War I and, like my father, got married after the war and had two sons. Both men grew up in Cincinnati — but never knew each other until, by chance, my father bought our first house from Howard, a small brick house on Clio Avenue in the Cincinnati suburb of Mt. Washington.

I was only 2 years old when the USS Arizona had its hull ripped open by a massive explosion, the ship sinking in a mere nine minutes. The 1,177 sailors and Marines who died accounted for nearly half of those who perished at Pearl Harbor on Dec. 7, 1941.

Many years later I began having a haunting memory of one of my parents’ saying that we “bought our first house from a man who lost both his sons on the USS Arizona.” My parents were both deceased, and no other family member had ever heard such a thing.

The memory persisted, popping back up like clockwork every Dec. 7 — until, aided by today’s technology, I finally put the rumor to rest.

A computer list of Arizona victims had only two sets of brothers from Ohio — and one of the addresses did match ours on Clio Avenue. But I wanted further proof.

The boys’ father was a Howard Keniston, a name new to me. But the computer even provided a photo of Howard’s tombstone in the Mt. Washington Cemetery, the names of sons Donald and Kenneth engraved on the same stone with identical dates of death — Dec.7, 1941. Their actual cemetery is the USS Arizona. Some survivors have requested that their ashes be interred with their brothers in the waters below the USS Arizona Memorial in Honolulu.

I have been enriched by several touching stories that emerged from my research. A retired Navy man contacted me to say that his ship passed over the site of the USS Arizona’s wreckage in the 1950s (before the memorial was constructed), oil seeping upward as it still does today.

A command came for all hands on deck and a salute. “The salute lasted nearly three full minutes and not one sailor brought his hand down until word was passed from the bridge.” The powerful reverence accorded the USS Arizona is an enduring measure of sacrifice and sacred memory.

Equally moving was the story of the other Ohio family who lost two sons on the Arizona. The Millers were celebrating their 30th wedding anniversary on Dec. 7, 1941, when they got word of the Pearl Harbor attack. They were devastated.

Every Dec. 7 thereafter, Mrs. Miller took a bouquet of flowers and placed them in a small stream on their farm, hoping that her thoughts and prayers if not the flowers would reach her sons.

Say a silent prayer for her sons, Howard Keniston’s sons, and all who perished that day that indeed shall live in infamy.

When Kate McClure ran out of gas on an exit ramp in Philadelphia, Johnny Bobbitt, a homeless man, walked toward... read more