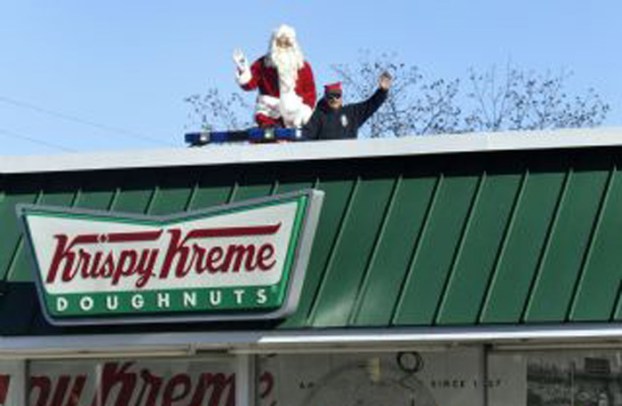 Toys for Tots takes to the roof of Krispy Kreme in 2009.

SALISBURY — Beginning when most people are on their way to work, a group of local volunteers will start their weekend of toy collections for Toys for Tots at the local Krispy Kreme.

The local Marine Corps Reserves program has partnered again with the Guardian Nomads Law Enforcement Motorcycle Club, whose volunteers will be at the doughnut shop, 1428 W. Innes St., starting at 8 a.m. today through Sunday evening.

The volunteers are collecting new, unwrapped toys for children in need and will also accept cash that will be used to buy more gifts. Organizers expect to serve more than 350 children in Rowan County.

Most families average three children, said Ann Arbelaez, who along with husband, Arbe, a retired U.S. Marine, are longtime Toys for Tots coordinators.

She said this year, any child who would like to mail a letter to Santa Claus can do so by depositing it in the Santa Mailbox that will be at Krispy Kreme all weekend. She said each will be guaranteed a reply to the letter.

Retired Salisbury Police Officer Mark Shue, who is president of the local motorcycle club the Guardian Irregulars, is a longtime volunteer. The partnership with Krispy Kreme was an idea he had about 10 years ago for a service project. He and other officers camped out over the weekend on the roof of Krispy Kreme in an effort to collect toys for the program.

Once Shue retired from law enforcement, he began working with the Toys for Tots Stanly County chapter. He returned last year to help in Rowan County, where it all began for him.

He and members of the motorcycle club will be at Krispy Kreme along with Arbe Arbelaez and other volunteers.

“Rowan has a much bigger population and need for toys, but every county has a need,” Shue said of returning to Rowan County to volunteer.

“Every penny we take in as donations is turned right around to buy more toys. Their CEOs are Marine Corps guys who don’t take any overhead. All of that money and toys will stay in Rowan County,” Shue said.

The following are Toys for Tots drop-off sites:

SALISBURY — Donald Kesler’s self-published “The Hill of Gold” comes in at fewer than 100 pages, but it still has everything... read more