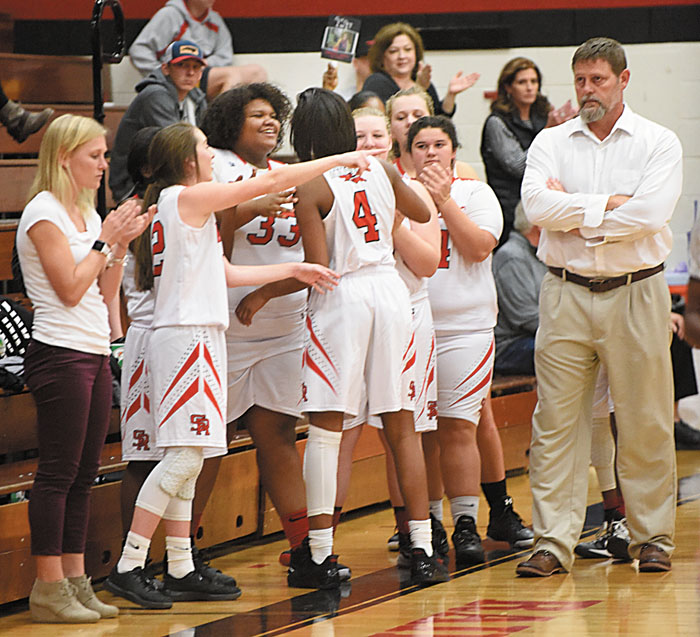 Wayne Hinshaw/for the Salisbury Post ... Janiya Downs (4) gets hugs from her South Rowan teammates after scoring the 1,000th point of her career. South coach John Davis is at right.

It was special that two girls reached the magical milestone in the same game, just 20 seconds apart, in the second quarter. It was more special that both girls are only juniors, so they’ve got a realistic chance for 2,000-point careers.

Both teams did a lot of shooting, but Ledford did a lot more making in a 68-46 Central Carolina Conference victory. Thorne, a 5-foot-6 guard who has quickness, range and a nice pull-up jumper, had a better night than the 5-foot-11 Downs, who scores mostly on drives and stick-backs. Thorne also got a lot more help from her buddies.

“I wish I’d gotten the 1,000 points on a better night for me and a better night for the team,” Downs said. “It was good to get it at home and in front of so many family members (about 40), but I struggled from the start. It wasn’t like I was nervous, but I felt like I really needed to have a good game and maybe I was too determined to have a good game.”

Even on a night that was far from her best, Downs scored 19 points.  Thorne had 27.

Downs, who poured in 31 on Tuesday at East Davidson, missed three games her freshman year with a concussion, so she reached 1,000 points in only her 49th game in a South uniform. For her career, she’s averaging 20.6 points per game. No South girl has ever averaged 20 points for a career, and the school opened in 1961.  Avery Locklear’s school record of 1,795 points obviously is well within reach for Downs if she can stay healthy.

“Janiya is one heck of a basketball player and she’s going to keep getting better,” South coach John Davis said. “I’m sure 1,000 points was on her mind some tonight and she did a lot more dribbling than she usually does. She was dribbling and the other girls were just standing around watching her, and that’s not who we are. Every good offense starts with movement.”

Ledford had plenty of movement, ball movement and player movement. South tried a couple of different zone looks, but had no success. The Panthers (2-0, 2-0 CCC), who buried West Davidson on Tuesday, easily got the ball into the middle of South’s zone, and then kicked out for open 3-pointers. If South matched up, Thorne was hard to handle. She broke down’s South’s defense and either finished or kicked to an open teammate.

“Both teams started out a little cold,” Doby said. “But then we played really good basketball in that second quarter. We’re fortunate enough to have all five starters back and they had a great summer, so we are pretty far along for so early in the season.”

When Tazah Hardin scored off a steal for the Raiders (0-2, 0-2 CCC), South trailed 13-10 late in the first quarter, but a 3-pointer by Emma O’Toole triggered a backbreaking 16-0 run by the Panthers. In a 24-point second quarter, Ledford swished five 3-pointers.

Thorne reached 1,000 points with a steal-and-drive combination with 1:36 remaining in the first half. Downs got to 1,000 with a free throw at the 1:16 mark, but it was all over by the break. Hardin and Riley Corriher had three fouls apiece, and Ledford was in charge, 40-15.

“We probably had one of the worst defensive performances in basketball history in the first half,” said South coach John Davis. “We’ve played two games and we’ve allowed two teams to score 40 points before halftime. Ledford has good shooters, but we just gave them so many easy looks. We’ve got to get better defensively.”

South played better in the second half. Part of that was an improved Downs. She looked like a burden had been lifted from her shoulders after she reached the milestone, and she was handling the ball more smoothly and whipping nice passes to teammates, as well as getting tough layups herself.

“There’s a lot more to being a good basketball player than scoring,” Downs said.

Corriher knocked down 3-pointers in the second half, as South mounted a mild rally. The Raiders got as close as 47-33 when Whitley Arnott made a free throw with six minutes left, but Ashley Anthony hit a 3-pointer and Ledford turned it on again. Ledford finished with 11 3-pointers, with four different players getting in on the act.

“Ledford was hard to defend because their ball movement was so great,” Corriher said. “And it wasn’t a good game by us. We just weren’t mentally into it like  we should have been. Usually, we’re on the floor, diving for loose balls, but tonight we were just watching balls roll.”

Doby said he didn’t know much about Downs or South, but he’s an East Davidson graduate and he got helpful hints from folks who watched South play at East Davidson on Tuesday.

“We kind of went in blind, but I’d been told that South had some girls who could score, especially Downs,” Doby said. “We didn’t know whether to put (agile post player) McCall Denny on Downs or to try to use Thorne’s quickness to contain her. We went with Thorne. She did a good job of staying in front of Downs, and there was always a lot of help-side.”

There was a celebration for Downs in the hallway following the game — posters, balloons, the whole nine yards. She managed a lot of smiles, but she’s a competitor, and it was easy to see she can’t wait for her next game on Dec .5.  She wants to play the way she can and she wants to lead the Raiders to the first victory of the season.

“Janiya is an inspiring player,” Corriher said. “She pushes us all to be better.”