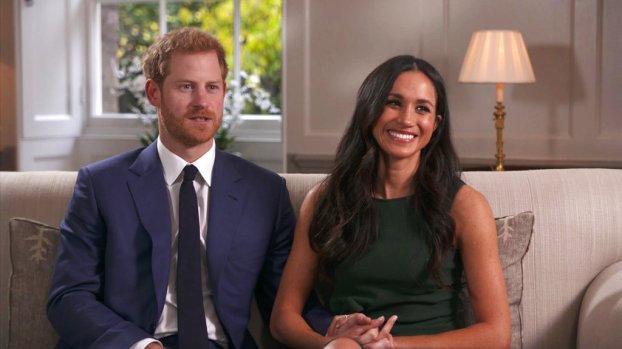 In this photo taken from video Britain's Prince Harry and Meghan Markle talk about their engagement during an interview Monday. (Pool via AP)

The Prince of Wales announced Monday that his son Prince Harry is engaged to American actress Meghan Markle. In England, the much-anticipated news set off a storm of speculation about Markle’s eventual title (likely the Duchess of Sussex), whether her status as a divorcee means the couple would have to have a civil ceremony (likely not, as the Archbishop of Canterbury seems as tickled as everyone else), and what, if anything, it means that a biracial woman is marrying into the British royal family after a storm of racist coverage early in the couple’s relationship. But in the United States, before we can get to all the glitz and gossip, another kind of question intrudes: Is there something unseemly about caring about this sort of thing? After all, didn’t we fight a war of independence to rid ourselves of a monarchy?

I’ll admit that my response to these quandaries is self-interested: I absolutely adore royal family gossip, and I’ve read both Tina Brown’s “The Diana Chronicles” and Heather Cocks and Jessica Morgan’s fizzy romance novel “The Royal We” multiple times. But I’m going to go ahead and give you permission to love every bit of this royal romance. There are a lot of things the American Revolution won us and among the least consequential but most purely pleasurable is the right to enjoy the soap opera that is a royal wedding without having to pay a dime for it or to give a fig about the implications.

Britain has to pay for the privilege – or burden, depending on how you look at it – of having a monarchy. In the fiscal year 2016-2017, the Sovereign Grant, the money paid to the monarchy that covers the public cost of the more than 3,000 engagements the royal family carries out each year, cost individual Britons the equivalent of 65 pence per person. When Prince William and Kate Middleton were married in 2011, the Prince of Wales picked up a lot of the tab himself, but security services still had to cover the cost of their own work to keep the couple and the attendees safe. There’s a reasonable debate to be had over the return on the public’s investment. But there’s no denying that the costs do exist, and that at times, Britain has found that it’s possible to make money off things such as the decommissioned royal yacht Britannia without paying to continue to operate it.

So is it any wonder that the British have sometimes sought some distance from the royal family in order to enjoy them as entertainment? The magazine Private Eye, Brown explained in “The Diana Chronicles,” covered “their lives like a weekly soap. . . . The Queen was Brenda, Prince Philip was Keith, Princess Margaret was Yvonne, Charles was Brian, and the married girlfriend with whom he was always on the phone was Venetia Barkworth Smythe.” The comedian Spike Milligan lampooned the tradition of standing for “God Save the Queen” The sketch comedy series “Monty Python’s Flying Circus” mocked the royals’ fondness for horse racing by narrating a footrace between seven Queen Victorias:

Across the pond, though, we’re burdened with no such cost and no such neuroses. Though we’ve saddled ourselves with a first family” prone to gilding everything in sight and lining their pockets, we’re not at immediate risk of a monarchical restoration. As a result, expressing pleasure in Prince Harry’s happy news or the word that Catherine, Duchess of Cambridge, is expecting another child can’t be interpreted as a stance on policy. We’re just enjoying the fizz, not weighing in on the costs of royal nuptials, the Church of England’s approach to remarriage for divorced persons or the decision that British families will only get tax credits that cover their first two children. We don’t need to add distance to make our enthusiasm more seemly or to drench ourselves in irony lest anyone think we actually care about all this rigmarole. It’s a sign of our emancipation that we can enjoy the news of this engagement without tying ourselves in knots about it.

In fact, at a time when the United States faces serious challenges in our civic relationship to authority, there’s something blissful about simply enjoying a relatively inconsequential romance as a romance. There are elements of this particular fantasy that are worth teasing out for what they reveal about the current state of American culture, from the persistent fantasy of gate-crashing European royalty to the special appreciation black women feel for Markle. We’re living through and paying the heavy price for our own national anti-hero drama. By comparison, rooting for Harry’s and Markle’s happiness feels like an uncomplicated relief.

As they fumble through so-called tax reform, the clarion cry of the members our Congress is “You should not have... read more