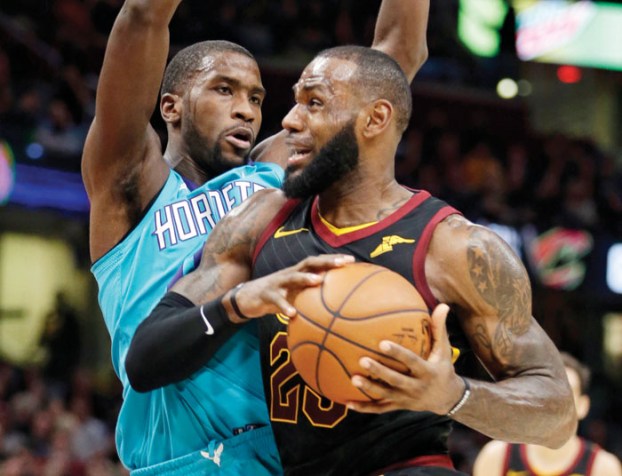 CLEVELAND (AP) — LeBron James had 27 points, 16 rebounds and 13 assists, J.R. Smith made the tiebreaking free throw with 48 seconds left, and the Cleveland Cavaliers extended their winning streak to seven straight with a 100-99 victory over the Charlotte Hornets on Friday night.

James had season highs in rebounds and assists in his 57th career triple-double. He’s 41-6 in the regular season against Charlotte and the Cavaliers have won 12 of 13, including eight straight against the Hornets.

After Smith split a pair from the line, both teams missed 3-point attempts and Charlotte called time with 11.1 seconds left. Jeremy Lamb missed a 3-pointer after the Hornets inbounded at midcourt and the rebound was tapped out to Kemba Walker, but his 3-point attempt fell well short.

For Black Friday, the Cavaliers wore black uniforms. Cleveland also wore black jerseys when it won the first championship in franchise history, but the current edition is minus the sleeves from Game 7 of the 2016 NBA Finals.

James also switched from yellow to black shoes after scoring six points in the first half.

Smith had 16 points, while Kevin Love had 11 points and 13 rebounds for Cleveland.

Dwight Howard had 20 points and 13 rebounds for Charlotte, which fell to 1-8 on the road. Michael Kidd-Gilchrist and Marvin Williams scored 17 points for the Hornets, whose three-game winning streak ended.

Howard’s free throw broke a 93-all tie after Love was called for a blocking foul. Love thought he established position in the lane and waved his hand in disgust following the call.

James made a foul shot and converted a three-point play, cutting the lead to one. Kidd-Gilchrist hit a free throw but James scored on a drive that tied the game with 1:48 left.

Cavaliers point guard Derrick Rose left the team earlier this week to handle a personal matter. Coach Tyronn Lue expects Rose, who has played in just seven of Cleveland’s 19 games this season because of a left ankle injury, to return to the team.

Hornets: G Nicolas Batum (bruised left elbow) was unavailable after being re-injured Wednesday against Washington and is day to day. He has only played in five games because of elbow injuries. Lamb returned to the starting lineup in Batum’s spot. … Charlotte’s only road win came against Memphis on Oct. 30.

Cavaliers: Rose sustained his injury while driving to the basket on Oct. 20 in Milwaukee. He’s averaging 14.3 points in his first season with Cleveland. … G Iman Shumpert (sore left knee) could return Monday after missing his third straight game.

Cavaliers: Travel to Philadelphia on Monday.

By Will Graves AP Sports Writer PITTSBURGH (AP) — Miami spent the better part of 13 months putting together the... read more