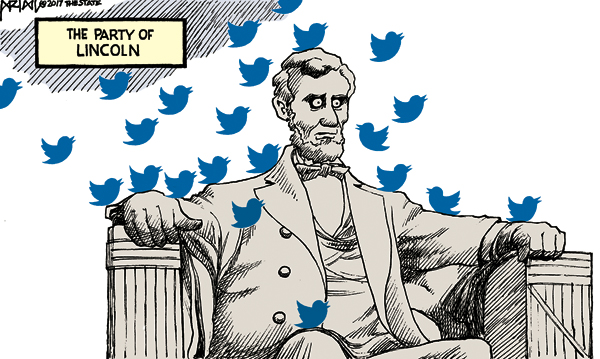 Encourage tweeter-in-chief to keep it up

Maybe Democrats should stop saying President Trump should stop tweeting. He may be tweeting himself into a hole he can’t dig out of.

This thought comes from Jim Messina, President Obama’s 2012 campaign manager, in Politico, “Trump’s Tweets Are Hurting Him With the Voters He Needs Most.” Messina wrote:

“Progressives across the country should be driving this message relentlessly: Donald Trump is more focused on helping the rich and picking fights on Twitter than he is with making people’s lives better.”

“Donald Trump is more focused on helping the rich and picking fights on Twitter than he is with making people’s lives better.”

That’s a 22-word-long message. Just the right length. And powerful — because it combines three things people know a lot about: Trump’s tweets, Republican priorities and their own lives.

You can read endless analysis, speculation and vituperation in politics, yet come away with no clear path forward. Messina’s is a ray of insight cutting through the clouds.

It reminded me of something my friend, pollster Harrison Hickman, said when Governor Hunt was considering running again in 1992. At the time, President George H.W. Bush had approval ratings north of 90 percent, after he won the war against Iraq.

Most Democrats were afraid to run in that climate. But Hickman, like Messina here, listened to swing voters in focus groups. The voters’ take on Bush: He did a great job on the war. But the economy is lousy. So he must not care about the economy.

There are few things more powerful in politics than a simple message based on facts that people already know and believe.

Letter: Net neutrality matters to you

Why should you care? Do you use the internet? Protections set up during the prior administration to ensure net neutrality... read more