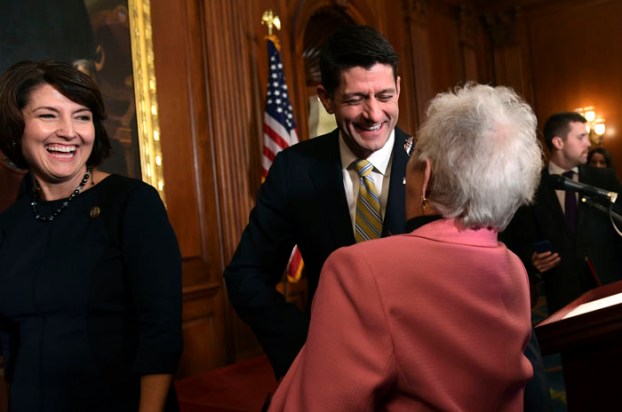 On Thursday, the U.S. House of Representatives passed major tax legislation by a slim margin and along party lines.

The bill, known as the Tax Cuts and Jobs Act, passed by a vote of 227-205 and now moves to the Senate. All House Democrats and 13 Republicans voted against the bill.

Rep. Walter Jones of North Carolina’s 3rd District, was among the few Republicans who opposed the bill.

The bill would amend the Internal Revenue Code to reduce tax rates and change credits and deductions for individuals and businesses. Key components of the bill include:

Jones said the plan could add trillions to the national debt.

“I’m all for tax reform, but it must grow the economy, not the debt,” Jones said. “Unfortunately, the tax bill voted on today would be financed not by cutting pending elsewhere in the budget but by adding up to $2 trillion to America’s debt.”

Rowan County representatives in Congress — Richard Hudson of the 8th District and Ted Budd of the 13th District — were in strong support of the legislation.

“Tax reform is about one thing: improving the lives of hardworking taxpayers now and for years to come and this bill delivers,” Hudson said. “ … (T)oday is such a great day for middle class families across our nation.”

Budd said the bill will cut taxes for the middle class, make the business climate competitive in the global economy, and simplify the tax filing process.

“(A)s a result of this bill, the average middle-class family in my district earning $59,000 will receive a $1,182 tax cut,” Budd said. “Rather than giving it to the IRS, a family would be able to keep this money and use for more important things such as raising their own children or paying down debt.”

An investigation by the U.S. Department of Health and Human Services found serious errors in North Carolina Medicaid and Medicare co-payments.

According to the report, released Nov. 7, investigations began after the identification of payments that did not comply with federal and state policy.

“States must make medical assistance available for Medicare deductibles, co-insurance, and co-payments (cost-sharing) for certain individuals who are dually eligible to be enrolled in both Medicare and Medicaid,” the report said.

North Carolina requires Medicaid to make the lesser of the cost-sharing amount or the Medicaid allowable payment.

Investigators calculated the Medicaid cost-sharing payment for a random sampling of 200 professional medical services provided from 2011 to 2013.

Of the samples, all were paid incorrectly — though 16 payments were canceled before the samples were reviewed. North Carolina failed to program its Medicaid Management Information System to calculate co-payments for professional medical services in accordance with the state’s required methodology, causing the error.

It is estimated that North Carolina made at least $63 million in improper Medicaid co-payments and claimed federal reimbursement of at least $41.2 million.

Health and Human Services recommended that the state refund this amount to the federal government and ensure that future changes to Medicaid payments comply with the Medicaid state plan.

Officials from North Carolina objected to the request.

“North Carolina disagreed with our findings and recommendations,” said the report. “It stated that it verbally informed CMS of its intention to deviate from the cost-sharing payment methodology in the Medicaid state plan.”

The votes are in: no changes from Tuesday

SALISBURY — The votes for the 2017 Rowan County municipal elections are in and official. Countywide, the totals did not... read more