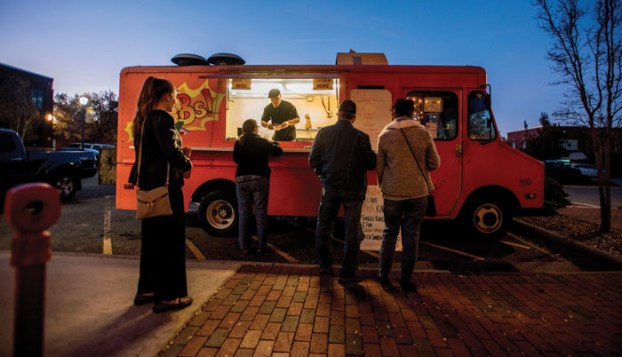 Andrew Dionne worked his final night out of his food truck on Thursday evening. Dionne served his marinated steak kabobs to the sound of a live band at New Sarum Brewery in Salisbury. After several years of working almost every day, Dionne is looking forward to getting married and and new career. Jon C. Lakey/Salisbury Post

Thanks for the memories, Kabobs owner says

SALISBURY — The Kabobs food truck has served its final “meat on a stick.”

After more than three years of doing business downtown, Andrew Dionne decided to close his truck for personal reasons. Thursday was his last day.

Kabobs was downtown Salisbury’s first food truck when it opened in March 2014, the fulfillment of a long-term goal. Dionne said he began working in restaurants when he was 16 and always looked forward to owning his own business.

“Coming out of college, a brick-and-mortar restaurant wasn’t an option, so I started the food truck,” said Dionne.

He had a business partner in the beginning, Jon Rojas. However, after one year, Rojas left to care for his ailing father in California, leaving Dionne to run the business alone.

At first, the big orange truck was often seen parked in front of Lee Street theatre, and for good reason. Dionne is the brother of Justin Dionne, who served as Lee Street’s artistic director until June 2016.

From the beginning, Kabobs’ menu featured chicken and steak kabobs served with options of rice, a Greek salad or pita bread. This simple recipe was all Dionne needed to establish himself in Salisbury’s downtown scene.

The Kabob truck has appeared regularly around Salisbury at Friday Night Out, Pops at the Post, the Pride festival and major events at New Sarum brewery.

Dionne said he has enjoyed working in the food truck but believes it is time to move forward.

“I’m getting married soon, and right now, I’m working too much, so I want to cut back to work on starting a family,” he said.

Dionne estimates he works between 80 to 100 hours a week between the food truck and his other job at Outback Steak House.

He has been offered a promotion at Outback, one that will allow him to spend more time with his fiancee. “It gets to a point where they want to give me a rise in position, and I’m gonna take it,” said Dionne.

Dionne is undergoing a “complete liquidation” of his business as his life’s next chapter begins. He is selling the food truck and possibly the whole business.

“I have a couple people interested in the truck. I’m offering the truck at one price and the whole business for another.”

Dionne is happy that his life is moving forward but admits he will miss a lot about life in the food truck.

“I’m going to miss the people, the conversations, and the relationships I’ve built with customers over the years,” he said.

He said he will miss the “aftermath” of serving more than anything else.

“It’s when people come to the window to tell you how great the food is and how much they enjoyed the service. That’s what it’s all about.”

He leaves the business with a feeling of gratitude.

“I want to thank the customers, our downtown food industry family, and everyone else who supported me over the years for the great experience and memories.”

SALISBURY — To Skinny Wheels Bike Shop owner Eric Phillips, starting a bike-share program seems like a solution to a lot of... read more