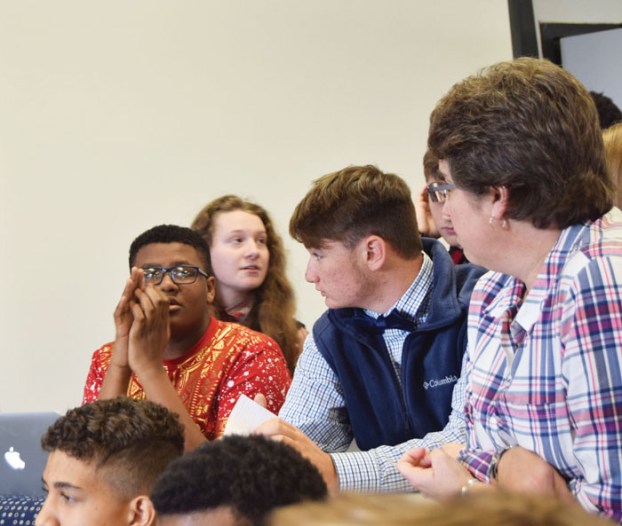 Helen Graf’s 10th-grade class recently read Sherman Alexie’s “The Absolutely True Diary of a Part-Time Indian,” a story about a boy named Junior who grows up on the Spokane Indian Reservation. With dreams of becoming a cartoonist, Junior chooses to attend an all-white high school off the reservation, where he is the only Native American student.

The book got Graf’s class thinking.

“So when we finished, we talked about the predicaments and circumstances this teenager … had had to overcome,” she said.

The book’s main character deals with poverty, bullying, mental illness and the effects of an alcoholic father. And students quickly realized that these problems are present in their own community as well.

“These problems are as real for us today as they were for the character in the novel,” Graf said.

“Our problem was how could we develop more sensitivity for those differently abled. … That was our problem to solve,” she said.

Students threw themselves into the project, researching issues such as bullying, autism, eating disorders, physical and intellectual disabilities, and alcoholism. They researched national and county trends and surveyed other students at East Rowan High School, then analyzed the data.

On Wednesday, the students presented their findings. Many took an extra step and, instead of simply raising awareness, they also sought to address each issue.

“We worked very hard on our PBL (problem-based learning) and hope to persuade people in our county to have empathy for people with individual disabilities,” student Nasir Barnes said during his presentation.

Graf said she is proud of her class. She said the group surpassed even her honors students.

“We wanted to walk the talk from the novel,” she said.