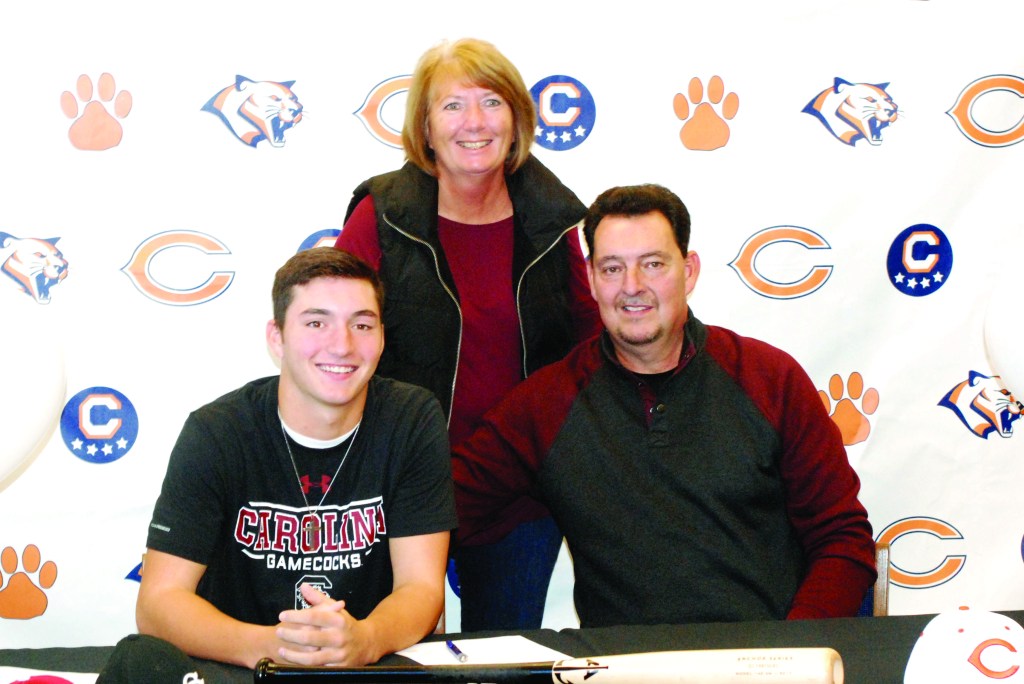 Dennis Davidson/The Salisbury Post Carson High School baseball star Owen White, left, signed a scholarship with the University of South Carolina on Monday morning in China Grove. He is joined by his mother, Casey, and his father, Tim, right. Nov. 13, 2017.

CHINA GROVE — Carson senior Owen White has always been good at attracting a crowd — and Monday was no different.

About 150 family members and well-wishers sardined themselves into the school’s media center, where White signed a national letter-of-intent to take his baseball skills to the University of South Carolina.

“It’s a huge relief,” the right-handed pitcher and shortstop said. “That’s one chapter of my life accomplished. Now that it’s in the past, I’m ready to finally get there.”

White turned aside offers from Clemson, Mississippi State, Florida and North Carolina before signing with the Gamecocks. He remains an enticing professional prospect and projects as a first- or second-round pick when Major League Baseball holds its annual draft next June.

“I’m not really worried about the draft,” said White, a 6-foot-3, 188-pound flamethrower who’s four-seam fastball consistently clocks in at 90-94 mile-per-hour. “You see all these people in here. They’re going to help me make that decision when the time comes, but right now I’m going to South Carolina to play baseball and go to school. I know baseball’s not always going to be there.”

It’s there right now. White was an all-state selection for Carson last spring, when he went 8-1 with a microscopic 0.33 ERA. Included was a no-hitter at East Rowan on March 7, a damp night when he faced the minimum 21 batters. He finished the season with 94 strikeouts in 64 innings pitched, owns a 22-8 career record and a radiant 1.06 ERA.

“As a high school player, he’s reached all of his goals except one — winning a state championship,” said longtime Carson coach Chris Cauble. “That’s what we’re aiming for next year.”

Obviously there was no off in White’s off-season. He spent the summer and fall playing for the South Charlotte Panthers, a travel team that participates in prestigious showcase and tournament events.

“Owen came to our attention three years ago,” said Panthers’ coach Don Hutchins. “And we actually played him up a grade, with our 2017 team the last two years. As a pitcher he’s an exceptional talent, a special player. And as a shortstop he’s got excellent range, a strong arm and is fiercely competitive. He does everything over and above. He’s got a chance to be a top-10 draft pick.”

White “upped his ante” — as Cauble indicated — in three recent showcase events. In September in Phoenix, he pitched a complete-game one-hitter with 14 strikeouts, earning Most Valuable Pitcher honors in the Wilson Premier Classic. In mid-October, he fired a complete-game two-hitter in the Ways To Play tournament in Lake Point, Ga. A week later White lit up social media with a dominant performance in the World Wood Bat Championships in Jupiter, Fla., where he needed just 87 pitches to record a complete-game, 13-strikeout, one-hitter against Division I commits.

“I’ve had the privilege of playing for a great coach in Coach Don,” White said of Hutchins. “He’s opened doors for me. He’s put me in places I never thought I’d be.”

Hutchins said he’s been contacted by scouts from all 32 major league teams. Most inquire about White’s signability — not his nose-to-toes curveball, late-breaking fastball or take-a-seat slider.

“They’re all there,” Hutchins said. “Baseball is a business and these aren’t your local cross-checkers. These are the guys that have the check books.”

Of course, that’s another story — one that will simmer until it’s hot and ready to serve next spring. In the meantime, White bypassed a chance to be Carson’s quarterback this past football season because he wanted to gain weight. Working with South Rowan assistant coach Brett Stirewalt during pre-dawn workouts, he’s added 12 pounds since late August. “Just getting the lower half strong, the core strong,” White reported. “We’ve made a big jump.”

It adds up to a lot of positives. White has a 4.12 GPA, a winning family pedigree and an unobstructed view of the bigger picture. He’s a pre-season high school all-American with a solid support system.

“The best part of Owen White,” Cauble told the attentive throng, “is that not only is he a great baseball player, he’s a better person. Good things do happen to good people. This is living proof.”

South Carolina certainly hopes so. Either way, White has the tools to succeed at a higher level. Now he has the chance.