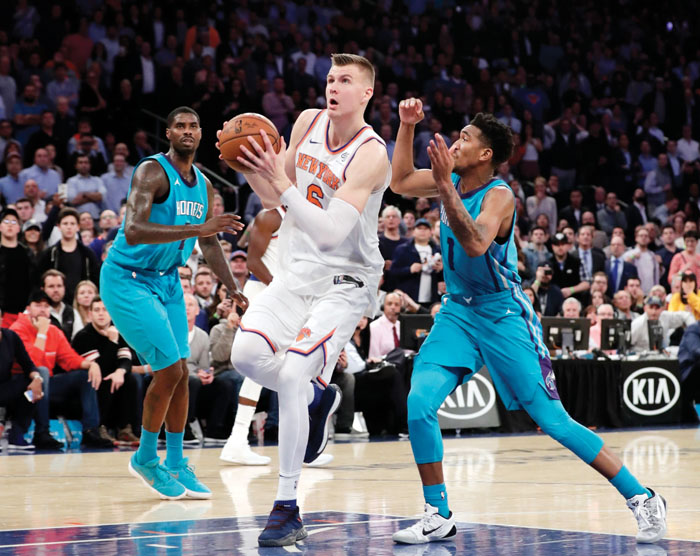 NEW YORK (AP) — No Knicks player has ever started a season like Kristaps Porzingis.

He won’t celebrate now, since he only cares about the finish.

Porzingis scored 28 points, including a tiebreaking 3-pointer with 1:48 remaining, and New York beat the Charlotte Hornets 118-113 on Tuesday night for its third straight victory.

The Eastern Conference player of the week was held below 30 for only the third time in 10 games this season, but he delivered when it mattered, scoring seven points in the final 2:32.

“The sweetest thing for us, the best thing for us, would be to make the playoffs. This means nothing,” Porzingis said. “If we can keep winning and I’ll keep doing what I have to do, then the real reward will come.”

Doug McDermott added a season-high 20 points off the bench and Tim Hardaway Jr. had 19 for the Knicks, who have won six of seven after an 0-3 start. New York shot 60 percent from the field to catch up and eventually pass Charlotte.

Asked what has keyed the Knicks’ turnaround, McDermott said: “Just unselfish play and having a guy like KP who is playing the best basketball in the NBA, borderline.”

The Knicks, who erased a 19-point deficit against Indiana in their last game, were down 15 in this one before mounting a charge in the fourth quarter with Porzingis on the bench. They cut it to four with about 7 minutes left, but Howard converted a follow shot and Walker banked in a 3-pointer to push the lead back to 109-100 with 5:34 to play.

New York answered with four 3-pointers in a 14-2 run, with Porzingis’ clutch shot from straightaway making it 114-111. His drive to the basket with 11 seconds remaining made it 116-113, and Monk missed a 3-pointer before Walker lost the ball out of bounds on the sideline.

“Too many mistakes down the stretch,” Walker said. “We made some really bad mental mistakes at the end and they capitalized. This is stuff we’ve got to learn from. We’ve got to be better with our execution.”

The Hornets were 7 of 9 from 3-point range in the first quarter and led 41-32. They increased the lead to 69-58 at halftime even with the Knicks hitting 61 percent of their shots in the first 24 minutes.

Hornets: Howard was listed as probable before the game with a sprained right foot, though coach Steve Clifford didn’t seem concerned that Howard would have to sit. … Walker snapped out a shooting slump by going 8 for 16 from the field. He was 8 for 27 during the Hornets’ losses to San Antonio and Minnesota.

The Knicks have come from at least 15 points down in back-to-back games for the first time since Dec. 18 and 20 against Utah and Charlotte.

The Hornets have not only had a tough schedule to open the season, but they had to play it short-handed. Nicolas Batum has missed all 11 games with a sprained left elbow, while Michael Kidd-Gilchrist has missed five. Charlotte has played Houston, Minnesota, San Antonio and Memphis, some of the strongest teams in the Western Conference.

“With the schedule that we’ve played, if you would have told me no Nic, really no MKG, missing Cody (Zeller) for a number of games, that we’d be 5-5 with this sked, I’d be fine with it,” Clifford said before the game. “We have a good team. This is by far the most talented team we’ve had since I’ve been there, and you can’t play without two starters. Not at the wing position or anywhere else.”

College football: Like Walker, Peppers is a coach on…